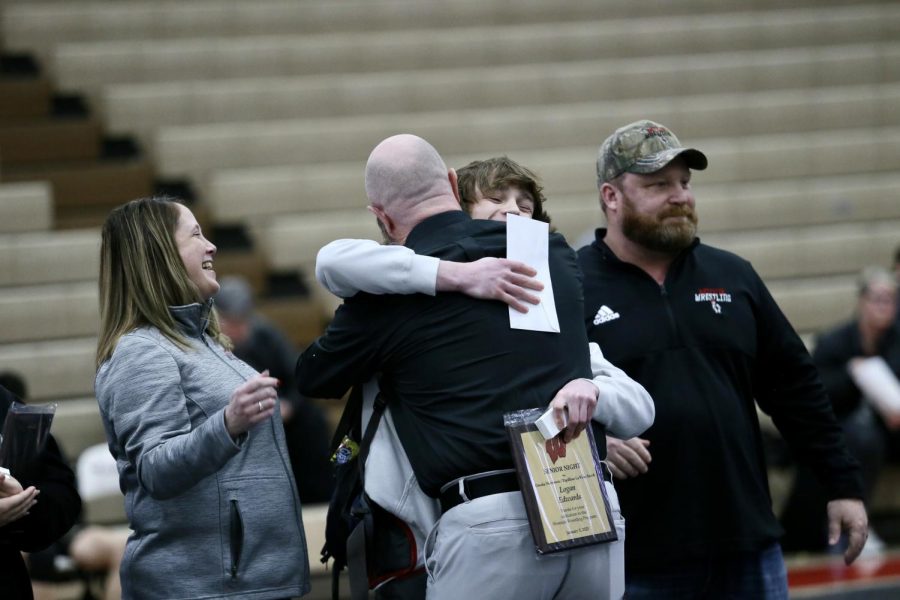 The Westside boys wrestling team hosted their final home matches of the season on Thursday, Jan. 5. The meet against Omaha North and Fremont meant the five seniors would be dueling one last time on their home mats.

Senior Logan Edwards has been a star since joining the team as a freshman, giving his all for his teammates everytime it was his time to work. Having been such a key wrestler, senior night hit a little hard for the 120-pound wrestler.  For the seniors this was also a time to reflect on the time they spent wrestling and the lessons they have learned through competing and from stellar coaching.

“I was excited because it was our senior night, but after I was a little emotional knowing I’ll never wrestle in that gym ever again,” Edwards said. “ The wrestling program at Westside helped me build not only friendships but brotherhoods and I plan on keeping this family forever.”

For another senior Michael Myers, the night came as a surprise. The transformation from a freshman to a senior can feel steady but the changes that you can make in four years is truly remarkable. Myers improved during his time with the program, by becoming one of the top 160-pound wrestlers not only in the school, but also in the state.

“It’s crazy man, I never expected it would come this fast,” Meyers said. “When people say time flies it really does in the blink of an eye, you’re a senior about to graduate high school. The impact I had was mind changing. The culture here is just so loving whether that comes from hugs and handshakes after practice to Jernigan giving you a hug telling you he loves you. Coming to Westside freshman year I would’ve said I was a cocky self-centered person. I didn’t really care how my teammates did as long as I did good. But the bond I have grown with these guys over the past four years is something I will keep for the rest of my life.”

Even though this is their last time wrestling on the home mats, it is not the last time fans will see them in Warrior red. With the state tournament coming up, these seniors look to make a memorable ending to their impressive careers.