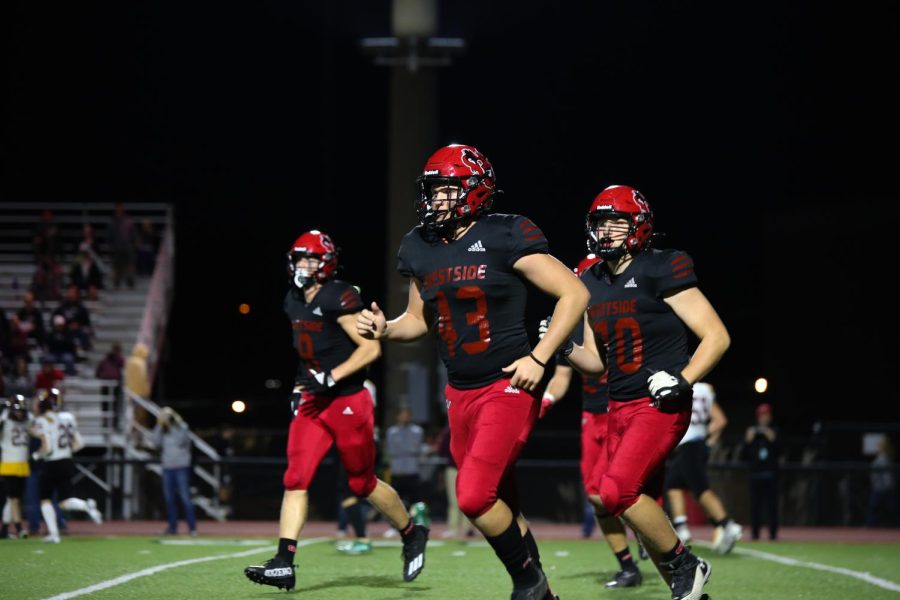 The varsity football team has made their return back to Memorial Stadium. The Warriors (11-1) will be facing off against the undefeated Gretna Dragons  (12-0). Westside will be making their fourth consecutive appearance in the Class A finals.

This isn’t the first time the Warriors and the Dragons have seen one another, Gretna beat Westside in the 2021 state championship game. The Dragons sealed a 7-3 victory with a goal line stand in the final seconds. Westside head coach Paul Limongi said the team will not be thinking about last year’s game heading into tonight.

“Preparation in practice will be key,” Limongi said.  “Also, our players will need to study their scouting reports and watch plenty of film.”

Last year Gretna’s state title was stripped away, after they had an ineligible player on their roster. Both teams are stacked with many key players. Gretna quarterback Zane Flores is a Oklahoma State commit with 28 touchdowns passes this season. Westside quarterback Anthony Rezac has passed and rushed for over 1,000 yards this season. Rezac described the team’s motivation coming into the matchup.

“A lot of our motivation during the off-season during workouts, or conditioning was kinda directed at us falling a yard short last year against Gretna,” Rezac said. “So getting another chance to play them, and especially for the state championship again makes it huge for me and everyone on the team”

Westside’s special teams will also be headstrong for this matchup, with senior five-star kicker Tristan Alvano.  Alvano has excelled for the Warriors by breaking the school record for the longest field goal from 57 yards. Alvano also leads the state with ten field goals this season. Limongi will look to his special teams to make a difference in the matchup.

“We are planning on really taking advantage of the kicking game this week,” Limonji  said. “We put a lot of time into effort all year long and we expect great things from this phase on Monday.”

The Warriors will have to fight hard as they kickoff at Memorial Stadium tonight at 7:15 p.m. The game will be televised on Nebraska Public Media/PBS.