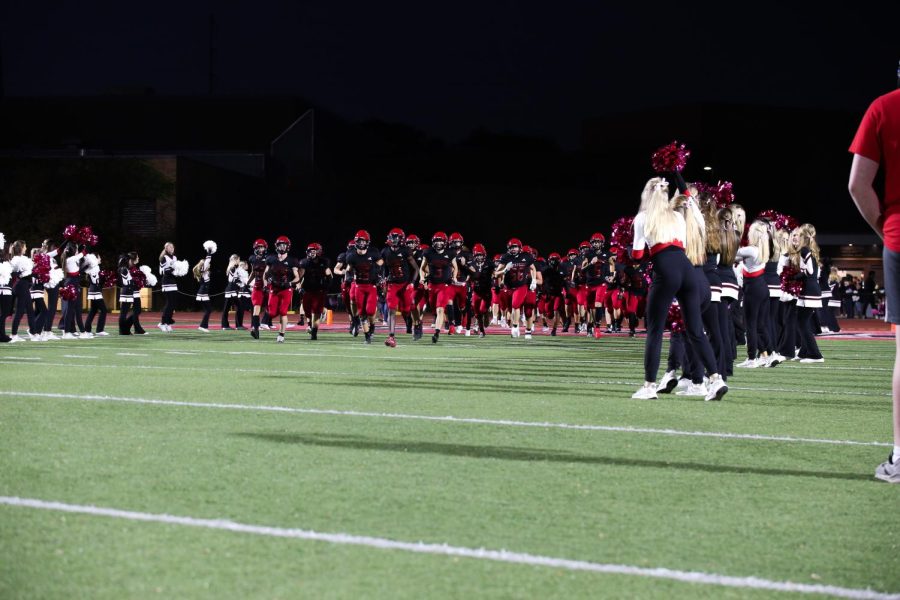 The football team takes the field for the first round of the playoffs. The Warriors were victorious over Papio.

The Westside football team defended their home field as they cruised to a 59-21 playoff victory over Papillion-LaVista on Friday, Oct. 28.

The Warriors attacked from all cylinders led by Anthony Rezac. The junior quarterback threw for 232 yards and connected for two touchdowns. He also rushed for 96 yards and scored two touchdowns.

“Knowing that Papio was missing their two starting corners, we went in ready to attack through the air,” Rezac said. “We have explosive receivers, so using our speed and forcing the defense to honor the deep threats left room to work all over the field.”

Being the number one overall seed, Westside certainly has a target on their back as they move through the state playoffs. Staying focused is key, and they didn’t let anything get in their way against the Monarchs.

“I think we had our best overall week of practice heading into the game,” Rezac said. “The [offensive] line, defense, backs, and receivers all balled out today, so we definitely saw a good result on the field.”

The biggest storyline coming from the win for Westside was the record-breaking kick by Tristian Alvano in the second half. Alvano nailed a 57-yarder, breaking his own school record for the longest field goal.

“As a kicker, you always love those long kicks,” Alvano said. “I went out there with all the confidence in myself and the field goal unit, and when I kicked it it felt so good.”

Alvano has been fantastic all season and leads Class A with ten field goals. Alvano  engraves his name in the record books and his efficiency all season long speaks for itself.

“I’m so thankful for  all the coaches and the players that work day in and day out,” Alvano said. “It was a really special moment with them.”

Westside looks to extend their season and build on this momentum once again as they take on Lincoln Southwest on Friday, Nov. 3 in the quarterfinals.