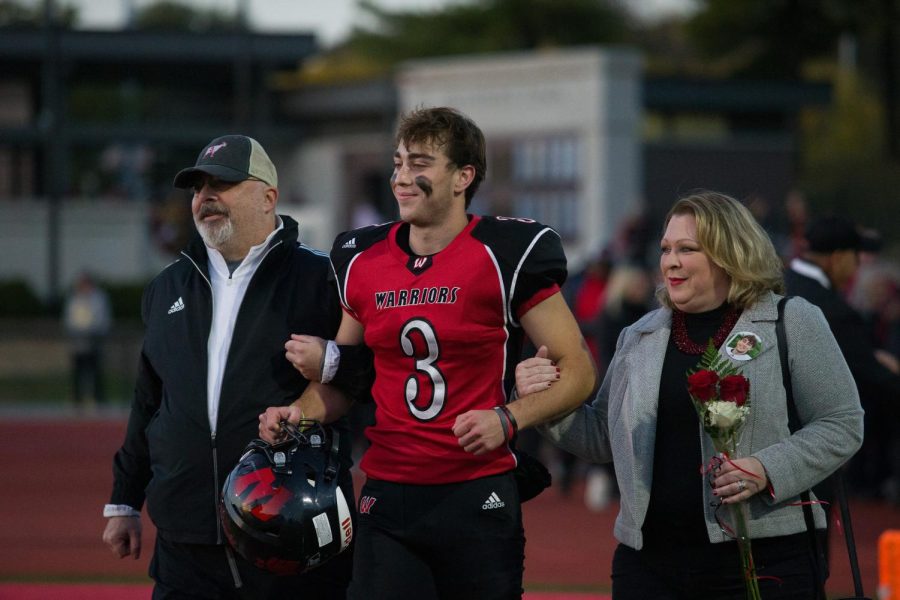 Leadership is something many athletes strive to reach. Westside kicker Tristan Alvano has stood up on the Warrior football team and has shown his leadership skills on and off the field.

Head coach Paul Limongi has seen Alvano’s leadership and expressed how the senior shows his skills.

“Tristan is a great leader for our football team,” Limongi said. “He leads by example and he leads with his voice.  You can always count on Tristan to work hard and do what he is supposed to do.”

Last year Alvano was named to the Omaha World-Herald All-State football team, after he connected on 11-14 field goals. He also made two 49-yard field goals in the semi-finals against Bellevue West. Alvano is among the nation’s top kicking prospects and has made many division one visits at schools such as Alabama, Oklahoma and Iowa.

“Finding the best situation for me whether that’s the relationship I have with the coaches, or the academics, or a place where I can develop my game the most,” Alvano said.

Alvano has had numerous achievements this year, including a school record for the longest field goal at 53 yards. Alvano is among the kicking leaders in the state of Nebraska.  Alvano is ranked number one in field goals with nine, kicks scored with 66 points, as well as most kickoff touchbacks at 45.  Westside assistant coach Garet Moravec has helped Alvano improve his kicking game, after playing forward on the Westside soccer team.

“I have been a soccer player my whole life. I talked about kicking between my 8th grade and freshman year,” Alvano said. “So I talked to Coach Moravec and asked him to work with me over the summer going into my freshman year. We both realized that we may have some potential and I’ve been working hard trying to focus on my craft ever since.”

Alvano and the special teams have been a huge part of Westside’s 7-1 record.  Coach Limongi has continued to notice the positive impact Tristan has had on his teammates.

“Tristan is friends with everyone on the team,” Limongi said. “He is always willing to listen and be supportive of others.  Tristan shows love to his teammates and they return that love to him as well.”

Alvano believes Westside’s success has been a team effort. He credits his snapper Will DePooter and his holder Marty Mormino for helping him become one of the top kickers in the state.

“Will is such a good snapper and Marty is such a good holder so it’s easy for me to focus on doing my job and only worrying about the kick because I know they’ll do theirs,” Alvano said. “So we are just a very complete unit.”

Alvano expresses that he focuses on what is right in front of him, instead of looking into the future.

“I think focusing on the present is easy because as a kicker I have to focus on the kick that’s right in front of me,” Alvano said.