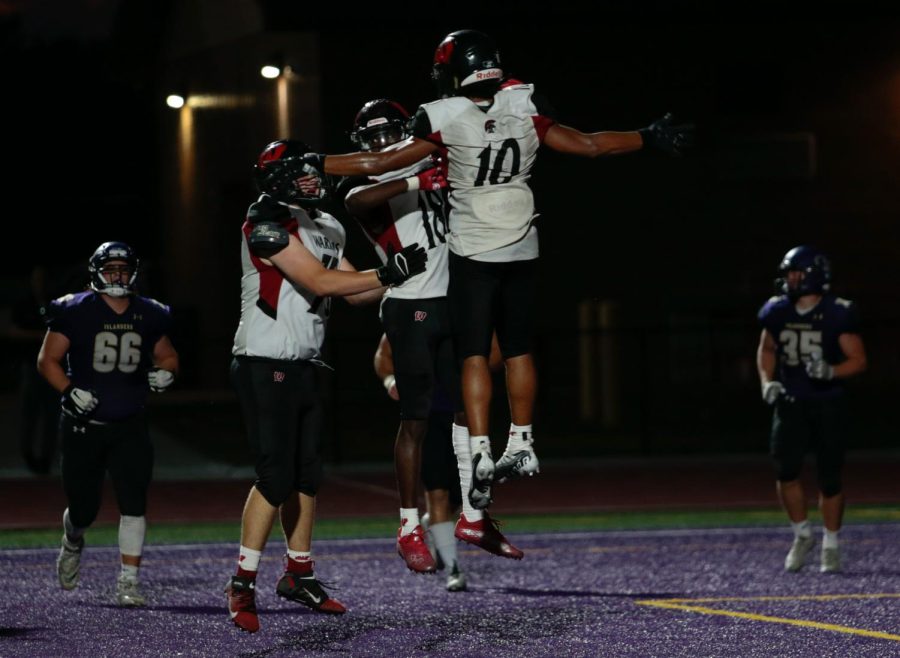 Senior Jaylen Lloyd (18) celebrates with teammates after scoring one of his two touchdowns against Grand Island.

The top-ranked Westside football team took care of business on the road against Grand Island comfortably, winning 37-13 on Friday, Sept. 2.

The Warriors came out hot, putting up 17 unanswered points early in the first half. The first score was a four-yard touchdown pass from junior quarterback Anthony Rezac to senior wide receiver Jaylen Lloyd, one of two scores by him in the game.

“It felt good to get a win on the road,” Lloyd said. “We prepared really well and didn’t let the long travel bother us.”

Starting off 2-0 is the ideal start to a season for any team, especially one with a new head coach. Although opening the season with two solid victories, Westside head coach Paul Limongi isn’t satisfied.

“I do think we came out and looked better than we did week one,” Limongi said. “However we have a lot of work to do in all three phases of the game.”

Improvement as the season wanes is vital for a squad looking to win a championship. Nevertheless, a win is a win, and that’s something Limongi understands as a head coach.

“Anytime you come down here to play a good Grand Island team and walk away with a win is a plus,” Limongi said. “We’re excited about it.”

Next up,  Westside will take on third-ranked Bellevue West, a team with both offensive and defensive firepower. The Thunderbirds come into the matchup with a perfect record of 3-0. Quarterback Daniel Kaelin leads the T-Birds and is the top passer in Class A with 842 yards and ten touchdowns. For the Warriors, they’re planning on trusting their game and leaving it all on the field.

“We plan on coming out and playing real aggressive,” Lloyd said. “It’s going to be important for us to go out there and play our game, not theirs.”

The Warriors will host the Thunderbirds tonight, September 9th, in a primetime top three matchup. The game will be streamed-live on WTV beginning at 7 p.m.