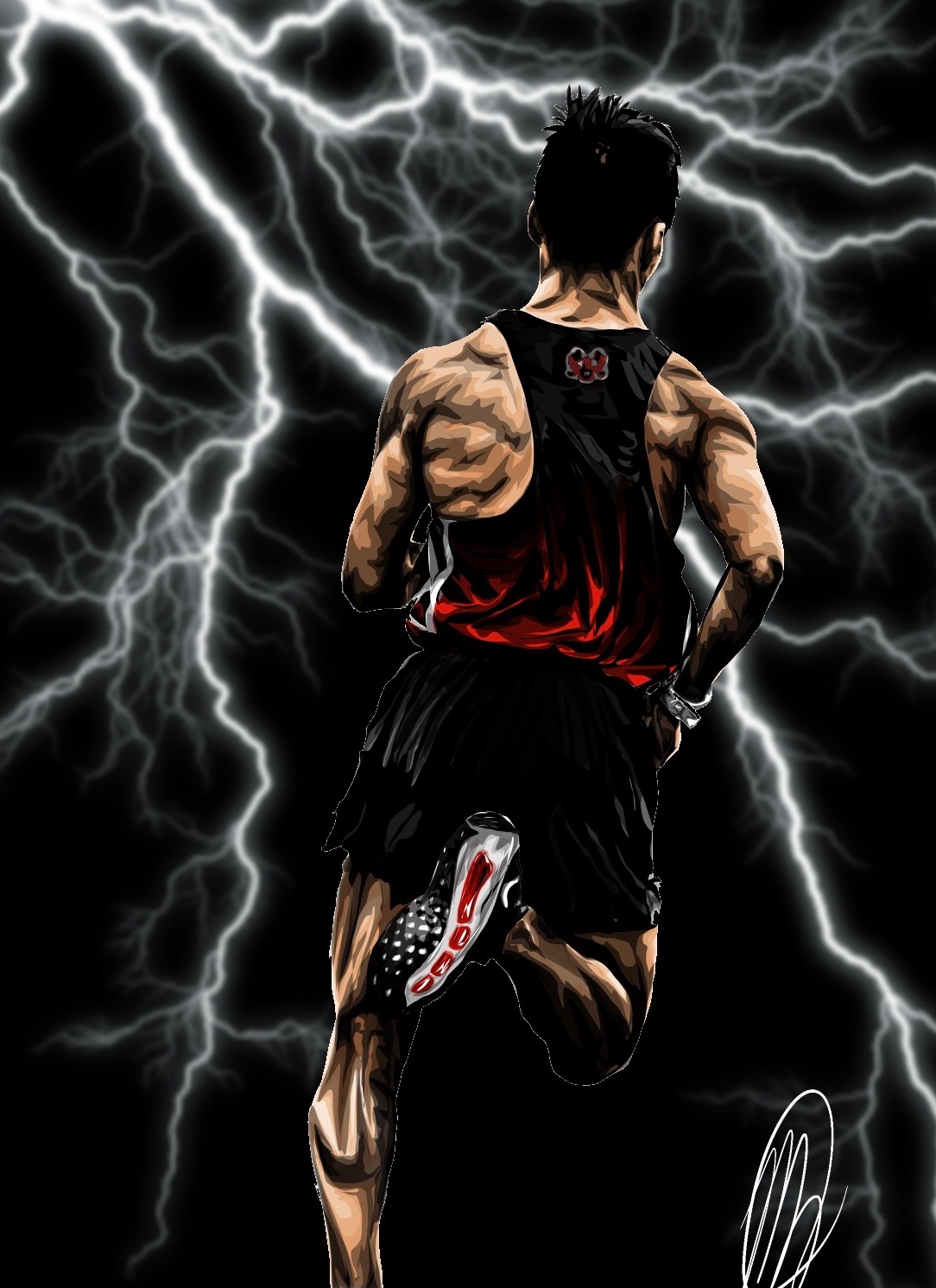 Athlete of the Week: Minh Nguyen

This week’s Athlete of the Week is unlike any before. Junior Minh Nguyen is a multi-sport athlete, having participated in cross country, track, wrestling and swimming. However, the junior’s athletic ability extends far beyond these sports, as he has completed extremely difficult running and physical challenges. Nguyen’s journey with running started when he joined the cross country team in middle school with no previous running experience.

“I was pretty bad. I kept with it and with that, I have always enjoyed the mental aspect of it. Really running is all mental,” Nguyen said.

This year, Nguyen stepped into the upperclassman position, teaching responsibility to the underclassman. Nguyen said that from the previous season, he improved by developing a better ability to focus on goals. Plenty of mental and physical training occurred in between these two seasons.

“At the start of quarantine, I heard about the four by four by 48 challenge by David Goggins. It is where you run four miles every four hours for 48 hours. You come up with a total of 48 miles in 48 hours. I heard about that and it looked challenging as heck, so I decided to do it,” Nguyen said.

Nguyen completed this challenge on April 1 and said that it was one of the hardest things he has ever done. He was very proud of himself and latched onto that feeling of pride and accomplishment to go even further.

“Following that, on May 18 I did my first half marathon. My goal was a sub-two-hour half-marathon,” Nguyen said. “I didn’t do much preparation training for that, but I knew that would test my running ability and physical and mental limits.”

Nguyen finished the half marathon at one hour and 57 minutes and didn’t stop there. Four days later, he discovered rucking, which is a military term for walking and running wearing a heavy pack. The standard rucking time at the US Army Ranger school is under 3 hours for 12 miles with a 35-pound pack.

“I got home one day from work, it was about 9 o’clock and I was tired. I saw a video of rucking on YouTube and thought to myself, that was the coolest thing I have ever seen,” Nguyen said. “I had a rucksack that was given to me so I loaded it up to 35 pounds and then I walked out my door. And I just did it. 35 pounds, 12 miles in a time of two hours and 58 minutes, right under the qualification time.”

Just three days later on May 25, he came across the Murph challenge which consists of running one mile, doing 100 pull-ups, 200 push-ups, 300 squats and finishing it off with another mile run while wearing a 20-pound weight vest. In just one week, Nguyen completed the half marathon, rucking challenge, and the Murph workout. On top of this, Nguyen developed a three-day lifting schedule throughout the summer inspired by junior Zach Atlas. Nguyen said that he saw Atlas hitting it hard and improving, so he wanted to do the same.

“In conjunction with lifting, I had the cross country summer program where we were hitting 20 plus miles a week, training six days a week. So lots of running, lots of lifting,” Nguyen said. “I was doing these military challenges in quick succession and just attempting to really callous my mind as David Goggins always said. Doing the hard stuff and building that mental perseverance. That was was basically my entire summer,”

This hard work culminated on Aug. 9, where Nguyen traveled to Oregon to conquer 11,250-foot Mount Hood. With no surprise, Nguyen didn’t just climb the mountain; he rucked it.

“The total distance rucked was 42 miles. I did that with a 40-pound pack in six days, which was quite the accomplishment for me. A lot of preparation and physical training paid off with that mountain climb,” Nguyen said.

He did not stop there, completing another running challenge on Oct. 24. This time Nguyen ran eight miles every four hours in 24  hours, adding up to 48 miles.

“Doing these hard things have resulted in a time in my life where I have never been happier,” Nguyen said.

“Warrior Poets Society is an ideal of what strong men can be. I have always found great purpose in identifying with them. They are men of arms, who can love, take care of their families and are skilled fighters,” Nguyen said.

From this, he discovered Navy SEAL David Goggins who runs 240-mile ultra marathons. Nguyen said that he is arguably the toughest man on earth, from whom he finds inspiration. Tony Cowden, who served with the 20th Special Forces Group (Green Beret), speaks heavily on how physical standards are the foundation of being a man. At age 13, Nguyen started listening and looking up to these former Special Operators and what they had to say about mental toughness.

“Looking at these men I absorbed as much as I could about them, and, through them, it shaped the way I think and look at life. All these guys are elite, elite soldiers. I’ve always thought they are the epitome of what an individual can be and I want to attain that,” Nguyen said.

Along with those people, Nguyen’s father and grandfather inspire him as well. His grandfather moved to the United States from Vietnam when Ho Chi Minh and his communist party took over. He had absolutely nothing, arriving in this country with no money. He and Nguyen’s grandmother worked as dishwashers for years, getting up at four in the morning, dropping their kids off at school and then working until late in the night.

“They had a tough life. They are the hardest, strongest people I have ever met,” Nguyen said. “Coming from that, my dad’s family lived in the ghetto, also known as East New Orleans most of their life, a very dangerous place, and very difficult life. From nothing, my dad was able to go to college on a scholarship and make a good life for me.”

Nguyen said that his parents put themselves through a lot of schools and late nights to enable him to be where he is today.

“My family and the generation before me went through too much for me to not aspire to be like them. That just harps on the amount of respect I have for my dad and my grandparents because they were some hard people,” Nguyen said.

Nguyen says that in order to be successful, you have to do hard things. He believes that physical and mental readiness is the foundation of life and that discipline equals freedom.

“Doing difficult stuff is such an undervalued action in life,” Nguyen said. “If you are looking for motivation, don’t look on Instagram and see some motivational quote. It will make you feel good for about five minutes and then you’ve got nothing after that. If you want to be motivated and be a go-getter, then you have to do the difficult stuff. Start with some push-ups. Start with some running. If you can’t run at all, walk. Start running one mile, then two miles and then three miles.”

There have been times, however, during which he has had no motivation and seen no point in doing difficult things. By persevering and pushing through, Nguyen has accomplished great happiness and fulfillment.

“Mentally, I have never been at a higher mental point than I am now and that is through doing difficult things and disciplining myself which is something everyone can achieve. There is no payoff for taking the easy way,” Nguyen said.

Nguyen didn’t take the easy way of pursuing his high school wrestling career. He said that he was never the best wrestler or the strongest. He considered himself the underdog, especially when it came to filling in varsity positions.

“I’d get whooped,” Nguyen said. “I would get my butt handed to me and then Coach Haberman, the wrestling coach, was always in my corner of the mat. Always cheering me on. Right there with me in the struggle.”

Nguyen said that he has memories of Haberman coming up to him in his stoic voice, telling him to keep pushing and fighting and that he would always be there in his corner.

“He has always been the epitome of good leadership. The epitome of what almost a father-figure could be to his athletes, and I am greatly indebted to him for everything,” Nguyen said.

Haberman coached Nguyen in wrestling last year and said they have a great relationship by working with him through the Fellowship of Christian Athletes.

“Being the track head coach, I’ll coach him in that and he’s actually going out for swimming this year instead of wrestling, which is awesome,” Haberman said.

Haberman describes Nguyen as a mentally tough young man who is willing to work hard, not afraid of taking on obstacles. Regarding the military challenges, Haberman said that that’s who he is, finding something that he wants to set his heart on and continues to go after it.

“That’s something that makes Minh great, you put a challenge out to him and he’ll do it,” Haberman said. “Who is a junior that thinks ‘I’m gonna try out for swimming for the first time?’ and he made the team because he’s not afraid to step up to a challenge.”

In agreement with Nguyen’s self-evaluation of his wrestling, Haberman said that he wasn’t the most skilled wrestler. However, it didn’t matter.

“If it was a JV meet or a Varsity meet, he would step out of the mat and wrestle versus the best of them. So what I hope I’ve taught him is to go find your goals and go achieve them,” Haberman said. “As [his] wrestling coach I hope I instilled the value of not being afraid to go out there and take on the challenges.”

What differentiates Nguyen from most people is his mental toughness. Haberman said that he has a lot of mental toughness that most kids lack at this point in their lives.

“He is a mentally tough young man. What he’s doing and where he is going to go, his goals, it takes a lot of mental toughness and that’s something that maybe some kids haven’t developed yet but Minh’s got it at a young age,” Haberman said.

Looking into the future, Haberman said that he can see Nguyen anywhere he wants to be. He said that he is a kid that can accomplish anything he wants.

“I have no doubt that kid is going to be successful, and I have no fear in saying that,” Haberman said.

One thing that Haberman likes to tell people is to get to know Nguyen.

“Minh is a really neat person with a lot of background and a lot of things that he enjoys doing, and he’s a young man that is willing to open up and talk to anybody and befriend or help and just a tremendous young man here at Westside,” Haberman said.