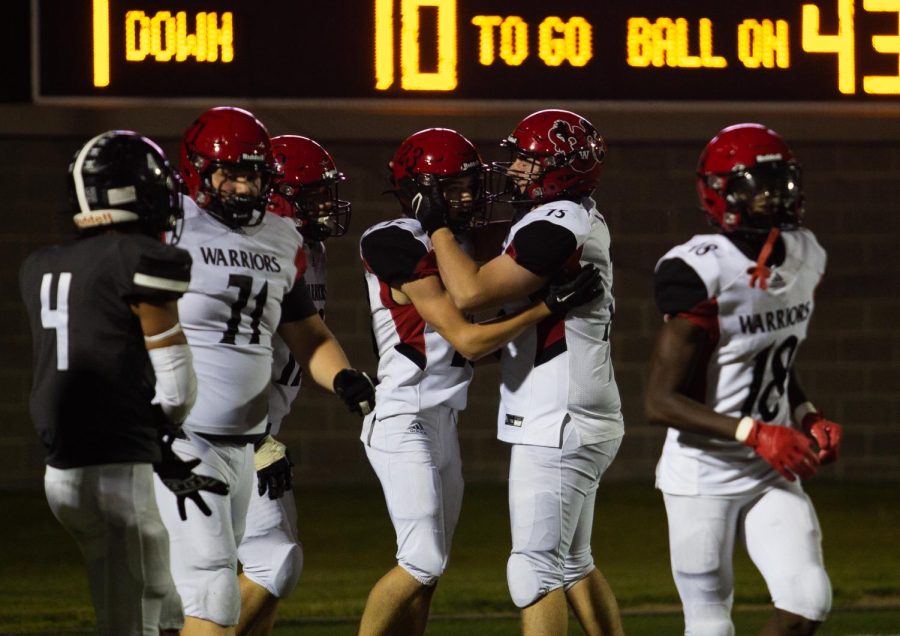 UPSET OF THE WEEK:

GAME OF THE WEEK:

The Monarchs have beaten everyone they’re supposed to beat, and have had a few one possession losses to schools like Millard North, Creighton Prep, and North Platte. Westside has a chance to become the first team to make four consecutive trips to the Class A finals, since Millard North made the journey to Memorial Stadium between 2002-2005. The Warriors should be able to handle Papio, in a revenge game for Keynan Cotton.

Westside is coming into the playoffs with multiple state appearances with one ending in a state title win back in 2020 beating Elkhorn South 37-21. For Westside we have multiple star transfers such as Jaylen Lloyd 79.5 receiving yards per game. As well as having Rezac in the pocket. The Warriors got this game in the bag with an ending score of 35-14.

The Silver Hawks have only lost two games, one of which to the Wildcats which came on October 13th. The Wildcats are amidst a five-game win streak. I see no reason to stray from the hot hand, and I’m taking the Millard West Wildcats to advance.

Lincoln Southwest has some venegens against Millard West as they lost in a close tight battle earlier in the season losing 27-23. The Wildcats are coming off of a winning streak heading into playoffs I think they will come off a bit cocky wanting to continue the streak. Lincoln Southwest Cal Newell senior running back who averages 134.9 rushing yards per game, I think we are going to see a stand out from him during this matchup. The final score will be close with a 24-20 finish.

The Patriots started off 1-3, without the help of star quarterback/Vanderbilt baseball commit, Cam Kozeal, who was away playing with Team USA. Since his return, the Patriots have looked a lot better, and after a close overtime loss to the number one seed Warriors, I don’t see how this team is a first round exit.

This will be an interesting game coming into the playoffs, both teams have the potential to win but I’m having a hard time deciding Millard South. I think Kearney will beat the Patriots and advance. Kearney has had some ups and downs with scoring this season, their worst loss being against Westside with a 42-14 finish score. Kearney will have to show up ready to play in order to beat this Patriot team. The finishing score of this game will be 40-35 making it a tight neck game.

The Islanders are 7-2 with losses to only Westside and Elkhorn South. Omaha North is led by sophomore quarterback Sebastian Circo, who’s received Division one offers across the board from schools like Ole Miss and Penn State. The Vikings also have the state’s leading rusher in Te’Shaun Porter, who averages 150 yards a game. Grand Island’s Colton Marsh leads the state in interceptions with seven this season. These two schools met on October 14th, and Grand Island took the road win 31-21. I expect a similar result when this time, the Vikings hit the road.

Both teams have seen each other before in the regular season Grand Island did come out on top with a 31-21 finishing score. But with that I think Omaha North will upset this Grand Island team. Teshaun Porter being ranked second in the state in scoring 126 points for the season. I expect a keep in the score making Omaha North winning by a touchdown in the end. Grand Island will be hitting the road back to the city after Friday’s game.

Lincoln East phenom Malachi Coleman, has been in the spotlight recently as he committed to Mickey Joseph’s Huskers last Saturday. That being said, the Storm have boomed past opposition all season, with only one of their nine wins being within one possession. Elkhorn South’s Cole Ballard leads the state in scoring by a HUGE margin with 33 touchdowns. The Elkhorn South defense is led by Noah Bustard, who has the most sacks in Class A with nine. The Storm will take this one.

This game is obvious on the end result, Elkhorn South has dominated the turf this season scoring a large amount of points against Omaha teams. Elkhorn South is stacked with multiple star players. One being Cole Ballard with 198 points this season making him ranked number one in the state in scoring. Ballard also ranks number one in touchdowns with 33 total touchdowns this year. Elkhorn South will be winning with a large number of points and advancing to the second round. The final score of 42-24.

The North Platte Bulldogs were 2-3, before they shocked the state and upset top-ranked Westside, giving the Warriors their first regular season loss since October 24, 2019. They have been riding high ever since, and haven’t looked back, finishing with a 6-3 record. The Junior Jays started 1-3, with three very close losses to Bellevue West, Westside, and Gretna. Prep has looked impressive since then, going 5-0 with a point differential of 151. Running back Charmar Brown has been the difference maker for the Junior Jays. I think Prep takes this in a close one.

Both teams have high potential to win this game, North Platte has shown some promise this season beating Westside 21-17.  But Prep has shown progress in their play as well as very close games against top ranked teams. Running back Charmar Brown averages 141.4 rushing yards per game and is expected to keep his average heading into Friday’s game. The Junior Jays will continue their state journey after Friday winning 24-20.

The T-Birds are highlighted by many big names, like 4-star wideout Dae’von Hall and 3-star quarterback Daniel Kaelin. Wide receiver Isaiah McMorris has been huge for the Thunderbirds too. Kaelin leads the state in passing yards at 2,755, and McMorris is 3rd in receiving yards at 1,087. On the other hand, running back Devyn Jones has been the guy for the Titans, with 17 touchdowns on the year. However, I can’t see a scenario where the Thunderbirds go home this week.

The Thunderbirds are going to continue their state journey after Friday’s game defeating the Titans with a 30-14 finishing score. Bellevue West has shown promise sticking it out against Gretna earlier in the season. The Thunderbirds have multiple athletes on their roster, with Daniel Kaelin ranked number one in passing yards with 2,755 total yards. As well as Isaiah Mcmorris who’s ranked third in receiving yards with 1,087. Papio South will be booted after Friday’s matchup making the Thunderbirds advance.

Zane Flores. He’s been that guy for the Dragons. The Oklahoma State pledge has passed for 26 touchdowns, and just three interceptions through nine games. The Dragons are looking for a legit state title, after being caught playing an ineligible player last season, thus getting their title vacated, after their 7-3 win over the Warriors at Memorial Stadium last November.

Gretna is looking for a real state title after their title was removed last year due to an invalid player. Gretna will be winning this game by a long shot with a final score of 50-14 making Lincoln Southeast head back to Lincoln and ending there season. Gretna has Zane Flores senior quarterback who has shown promise and is ranked fifth in the state with 2,203 passing yards.