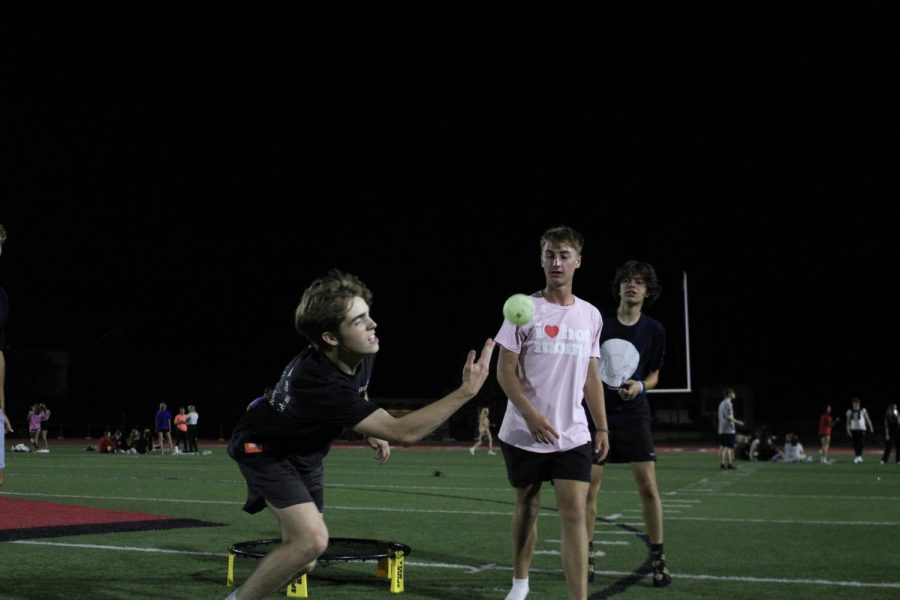 Senior Josh Caffey dives for the ball while playing spikeball at the “Guard the Field” event.

Guarding the field has been a tradition at Westside for the past 10 years. The night before the Creighton Prep vs. Westside football game, seniors are permitted to spend the night on the football field to guard it from potential vandalism. In past years, seniors have brought tents and games to use throughout the night.

In an email from Assistant Principal Andrew Wane on Aug. 22, the senior class was informed that Westside would not sanction the event in 2022 or in future years. According to Wane, the event was canceled due to safety concerns.

“Last year, there was a situation at the Guard the Field event that could have had tragic (or at least very unfortunate) consequences. A firework was thrown into the stadium and landed nearby a group of students in the northeast corner of our stadium.  While we narrowly avoided disaster in this circumstance, as a building leadership group we don’t feel continuing to have this event is a responsible decision,” Wane stated through the email.

Wane released another email later that day which proposed a compromise on the situation.

The compromise included: the event running from 8:30 pm to 10:30 pm, rather than overnight; the event taking place on the West stands towards the North end of the stadium; seniors being required to show their Student IDs; and tents not being permitted.

While some students were excited about the solution, senior Izzy Eastman said she doesn’t understand the rationale of the new compromise.

“I think the whole way they’re doing it is ridiculous,” Eastman said. “They sent out the email saying that they’ll put security to guard the field so that nothing happens to it, but apparently they’re not improving security enough so that it’s safe for kids to stay overnight there.”

Eastman said other compromises could have been made to include the tradition of guarding the field overnight.

“All of us could have slept in the gym,” Eastman said.

The act of guarding the field is just one of many traditions that have been banned already this school year, and Eastman said that administration can’t expect students to continuously have positive feedback on these changes.

“It’s been proven that our class has been the hardest to bounce back from Covid, and we lost our sophomore year which was supposed to be our year to just kind of cruise through high school,” Eastman said. “Now this year is our last year and this is the year they’re taking everything away. They can’t take away everything and expect us to be so open and accepting of everything.”

Eastman wishes that administration had listened to more feedback before making the decision.

“I think that the new principal definitely didn’t care to hear anyone else’s opinions before calling it, because it’s not like he said he would reevaluate for years going forward,” Eastman said. “He said that he wasn’t doing it going forward for anybody.”

Eastman feels that this was a questionable decision for Dr. Dostal to make during his first year as principal at Westside.

“That’s just a really low way to show yourself when it’s your first year of teaching,” Eastman said. “A bunch of kids have really no idea who he is, and then just to take something away that so many of us were looking forward to is heartbreaking, honestly.”

While Eastman decided to attend the event, she still wishes it had been a more traditional experience.

“I still wanted to go and still want to make the most out of it, it’s just still really upsetting that we don’t get to experience it like so many other people did, who loved doing it,” Eastman said.

Dean Brad Metzler said this is not the first time the event has been canceled.

“My understanding was that this tradition was actually done away with once before, but students brought it back nine or ten years ago,” Metzler said. “It was really difficult the way that it was formatted too; it was just a really difficult event to supervise.”

According to Metzler, the decision to change the event was made to keep students safe.

“Everything that we do, we look at the safety of our students and our staff,” Metzler said. “So that was why we did that; not because we wanted to make the seniors upset or rain on anybody’s parade or anything like that, just student safety. That’s why the decision was made the way that it was.”

“We had some really nice student emails that came in that asked that we reconsider, and we did the job of taking those into account and finding a compromise,” Metzler said. “From what I heard, we had about 200 students in attendance, and the event went really well. Hopefully that’s something we can kind of build on going forward, and still have the tradition, but just a little bit modified.”

Metzler described what the event looked like in previous years.

“In the past, it used to be until 5 in the morning, then a couple years ago I think it got shortened to about 1 or 2 am,” Metzler said. “All the lights were off, and students used to be able to sleep in tents on the field, which obviously makes supervising and managing that event difficult. So, those were some of the changes that were made.”

Metzler explained how these changes were implemented at the event.

“The lights were on, it was from 8:30 to 10:30, and there were multiple members of our security team that were out there, as well as the administration making kids pancakes,” Metzler said. “We did kind of a late night breakfast, hung out and played some fun music and had a good time. The difference was basically shortening it, keeping the lights on, and just making it a little bit safer for students.”

Metzler said the student feedback towards the event was extremely positive.

“From what we heard from the students that were there, [the feedback] was really positive,” Metzler said. “Everyone really enjoyed it. We appreciated the fact that students were able to see our side of it as well, because we knew it wasn’t going to be the most popular decision, but I think students appreciated the fact that we were able to kind of work with them and we didn’t just say “No, that’s the final decision.” I think everyone was happy that we were willing to listen and work towards a compromise and created a pretty cool event that I think a lot of people will enjoy for a long time.”