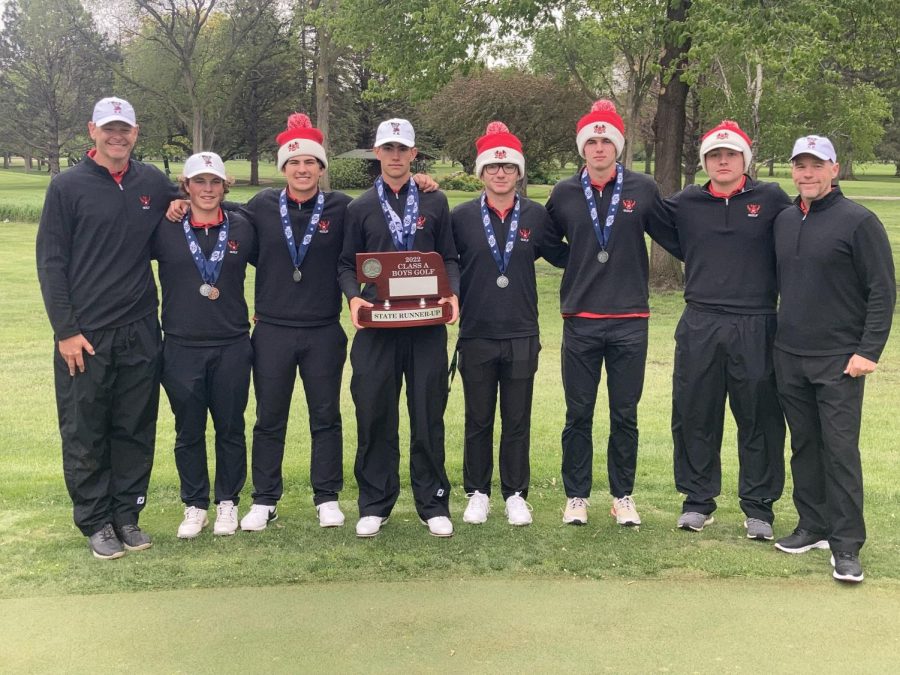 The Westside boys golf team finished as the runner-up in the Class A State Championship at the Norfolk Country Club on Wed., May 25.

The Warriors ended up one stroke behind the State Champion Lincoln East.The Spartans finished with a two-day total of 596 (+20 over par), compared to 597 (+21 over par) for Westside.

Westside head golf coach Brett Froendt watched his team start the final round with a two-stroke lead, but the Warriors could not hold on.

“I’m proud of them. It’s disappointing, but I’m very proud,” Froendt said. “We’re all disappointed because we had a good round today and a good round yesterday with the conditions, but they finished a little stronger. I couldn’t be more proud of how the kids performed up here. Good teams dropped off and we just didn’t finish it at the end, but I couldn’t be more proud.”

Three Westside golfers ended up in a tie for fourth place at 4-over-par. Jackson Benge shot a 75 in the final round to finish with a score of 148. Kolby Brown recorded a final round of 76. Porter Topp shot a round of 77.

Brown is headed to Creighton University on a golf scholarship. The senior was thrilled with the team’s performance this season.

“It means everything,” Brown said. “I get to play with some of my best friends in the world. And this year, I struggled a little early on in the season, a little further out, but finally kind of found my game and showed out pretty good on the first day. On the second day, it was a battle. I couldn’t be proud of the way I battled, and the way the other guys battled as well, and we kept it together really well. So this is the most fun I’ve ever had on the team and I’m proud of the guys, proud of the season.”

Westside’s Jack Davis tied for 16th place at 9-over-par and Thomas Kroeger ended up in 45th place at 21-over par.

After coming so close in the final round, the Warriors have a bright future with sophomore Jackson Benge and junior Porter Topp returning next year. This is Froendt’s final year as head golf coach and he gave a lot of credit to the senior class for the team’s success.

“I didn’t think too much about it until you asked me.” Froendt said. ”It’s a great group of kids to leave with. The class of 2022 is pretty special. Football program, golf program. Kolby is a special kid. I can’t think of anything more of a kid then what I want in a son, and he’s a great kid. And having Jack Davis and Chase, Connor and those guys. It’s been a good class, a good one to leave with. The programs are in great shape, so I’m happy about that. Both football and golf.”

Coach Froendt is retiring after this season, so assistant head golf coach Jered Hellman will take over next year.

The Westside boys golf team will go down in history as one the best ever, after shattering the school team scoring record at 293. The Warriors set the record at the Class A-1 District tournament, after tying their own school record from earlier in the season.