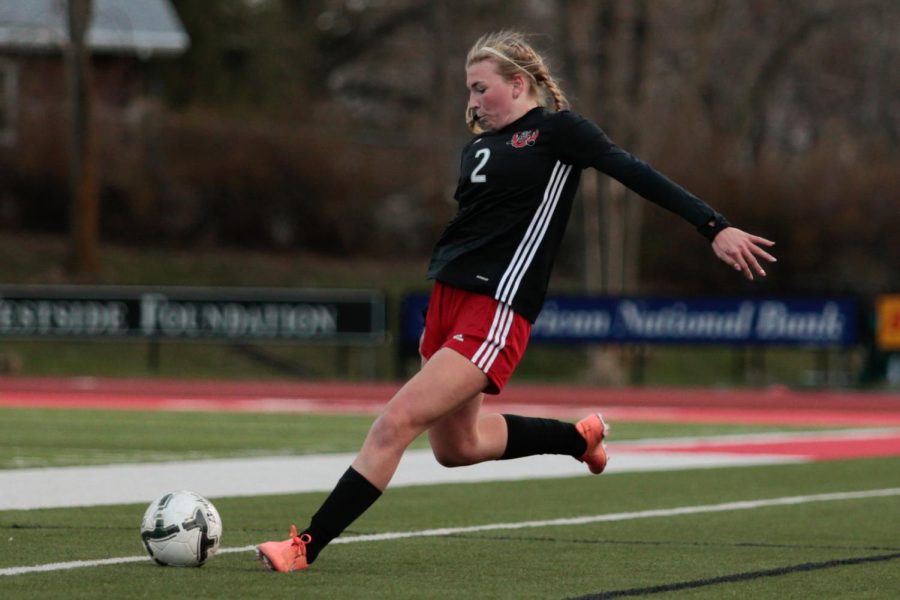 Then junior Elle Hoffman booths the ball into play in Westside’s 2-1 win over Millard North on Mar. 30, 2021

The Westside girls soccer team is returning off of a non-state qualifying season, and they are ready to make a statement. The Warriors believe that last year wasn’t their best showing and now they’re ready to comeback with a boom.

Senior and varsity team captain, Elle Hoffman, sees a lot of promise in both the team on and off of the pitch and hopes it can translate into wins.

“I am very excited,” Hoffman said. “We have a very young team and some very good upperclassmen. I think our team has a very good chemistry and we are all able to work well with each other.”

In 2021, the Warriors ended their season at 6-9 following a district final loss to Marian. Hoffman is expecting the team to put their foot on the gas for this season in order to qualify for the NSAA Class A State Tournament in late May.

“Last year we had a tough final district matchup, we ended up playing a great game with unfortunate results,” Hoffman said. “I think our team is better this year and if we play up to our potential we can definitely show how underrated of a team we are.”

Head coach, Chris Dunford, in his second full season with the team, is also looking forward to the season and the talent that is on the team.

“We’re still young with nine underclassmen on varsity but we also return nine of the starters too,” Dunford said. “So we have a young but somewhat experienced group that went through a really tough season in 2021.”

Westside’s senior class has four returning players who have been on the varsity squad since their freshman year. That year, the Warriors made the state tournament, however, falling in the first round for the seventh time in eight years. For Dunford, the leadership and experience that those seniors have will help the team mold with strong underclassmen.

“They have been part of a team making it to state and they know what it takes,” Dunford said. “Another one of our seniors (Lauren Gieselman) started all of the 2021 season and flourished in her varsity starting role. They have a young team around them but have one of the state’s best keepers (Delani Daubman) and that gives you a chance in any game.”

Hoffman, being a senior, is looking to play her last season at westside and is ready to leave it all on the field.

“Obviously I want us to win state my senior year,” Hoffman said. “But overall I just want to have fun for my last season and play hard every game and do what I can for my team before I leave.”