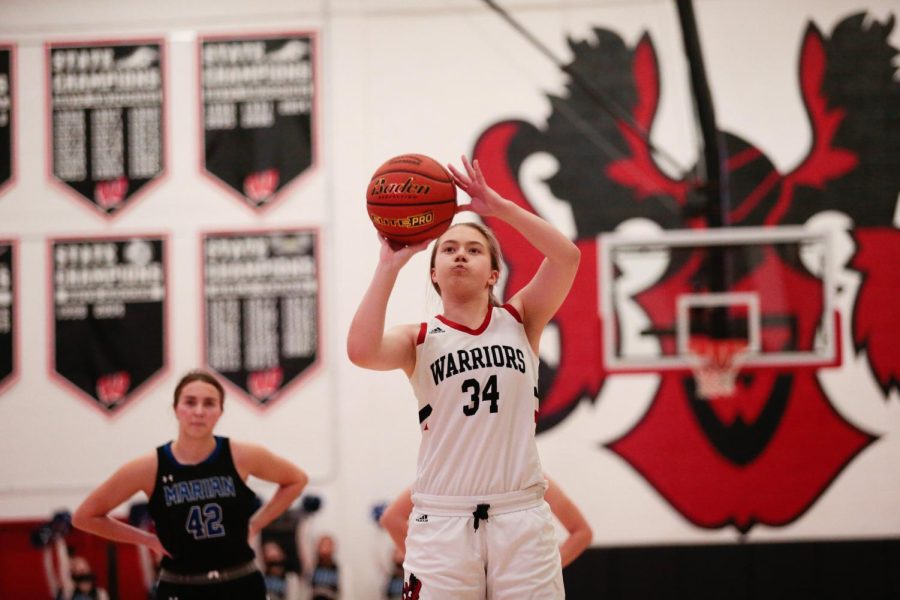 Elaine Wiles sets up a free-throw attempt on Jan. 20 against Omaha Marian

The Westside varsity girls basketball team wound up on the losing end of a 53-32 district matchup against Lincoln Northeast, signaling the end of the season. Staying level-headed was a point of emphasis for Westside, despite the loss.

“Everyone starts districts 0-0,” head coach Steve Clark said. “We have to take it one game at a time.”

Leading up to the Feb. 26 game, Westside’s season had entered a downward spiral as they lost six of their last seven games. Clark understood the task at hand heading into the game.

“As a team, we have to live our roles and live our values,” Clark said. “The need for positivity and togetherness becomes even greater.”

The odds certainly were against the Warriors going up against a solid then 14-8 Lincoln Northeast who were the second-seed in the A-3 District. Junior Elaine Wiles, who led the way with nine points for the Warriors, reflected on what could’ve altered the result of the game.

“Their zone defense really slowed us down,” Wiles said. “We did get a lot of good looks but just missed some shots.”

Westside girls basketball ends their season at 13-11 following the loss. They will look to replace nine current seniors with underclassmen and four returning players.