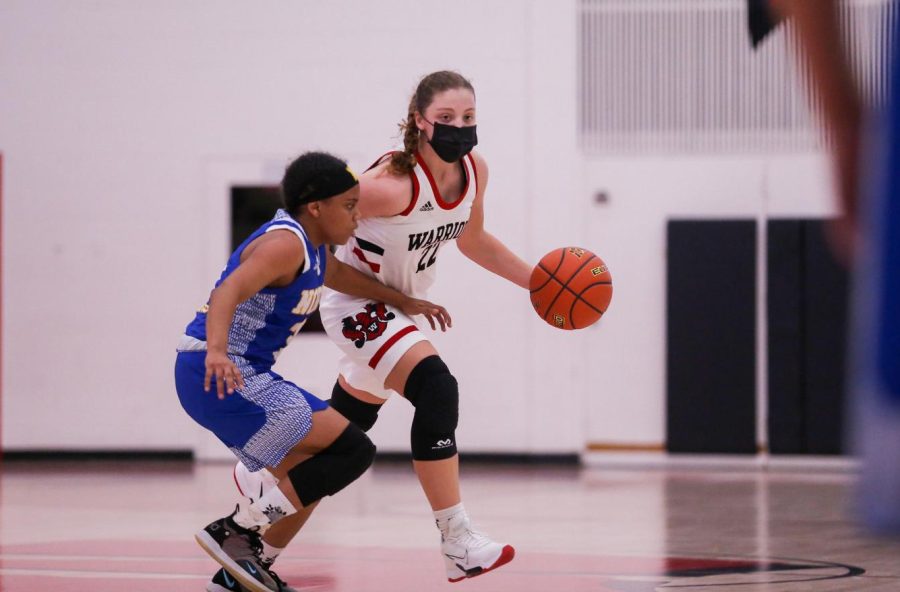 Kaitlyn Hanna (22) dribbles around an Omaha North defender in 2020. The Warriors will take on the Vikings in their next matchup on Thursday, Dec. 9 - Photo by Mary Nilius

The Westside Warriors varsity girls basketball team started their season with a one-and-one record after their tip-off tournament. The Warriors beat Columbus on Thursday, to advance into the tournament final, where they fell to Lincoln High 57-32.

10th-ranked Westside started their season with a home game against the Columbus Discoverers on Thursday, Dec. 2. The Warriors headed into the game with a new play style, inspired by the speed on the team this year.

“I’ve helped for 10 years and this team, as a group, has the most speed of any group I’ve seen,” volunteer assistant coach Dave Martin said. “Steve has adjusted the style of play to be much faster paced and it should be fun to watch.”

Despite an adjustment in playing speed, Westside managed to battle through errors and come out with a win. In the game, the Warriors lost momentum in the second quarter after barely gaining a lead in the first, and went into halftime trailing Columbus 26-22. Westside came back after the break with a new burst of energy, and it showed on the basketball court. The Warriors cinched the game by holding the Discoverers to only 22 points in the second half, compared to Westside’s 36.

“I think we just played really well as a team,” junior Olivia Kraft said. “We were prepared for the first game, and we knew we were gonna make mistakes. We did, and we also won the game. I think we just learned from those mistakes and kept going.”

Nine seniors strong, the Warriors knew that winning the first game of the season was important. Not only is it good to start with a winning record, it was also the last first game for those who will graduate next spring.

“We have nine seniors and it was their ‘last first game,’” junior Lucy Schonlau said. “It was a big milestone for a lot of people, so it was important to start the season with a win and with a lot of energy. Energy is something we focus on a lot, especially bench energy and everyone cheering each other on, so that’s one of the things we talked about during the game.”

With a win in hand, Westside prepared to play Lincoln High at Millard North on Saturday, Dec. 4. The Links started the game off strong, outsourcing the Warriors in the first quarter 17-5. Westside finally managed some momentum in the second quarter and only trailed Lincoln by one point going into halftime. After the half, the Links dissolved any momentum the Warriors may have had and finished with a dominant 25 point lead. Unable to overcome nerves, Westside tallied their first loss of the season, falling to Lincoln High 57-32.

Kraft believes that for the future, the Warriors will have to have more of a team mentality.

“We’re just working on just being together as a team,” Kraft said,  “you know, work as a team and don’t be selfish; be selfless.”

Westside will tip-off against Omaha North on Thursday in the Vikings’ home gym. Before that game, the Warriors plan on practicing their team chemistry, as well as toughening up their play on both sides of the ball.

“We’re gonna work on a lot of defense,” Schonlau said. “Help defense, a lot of pressing, stuff like that. Also, just finding more ways to put shots up on our offense.”

Westside will travel to Omaha North on Thursday, Dec. 9, where they hope to improve their record to 2-1.

“There’s a real potential,” Martin said. “We’ve got speed, we’ve got height with Lucy, we’ve got some really good ball handlers. We could be a top five team if everybody clicks and rises to the occasion and performs at the level that they can.”