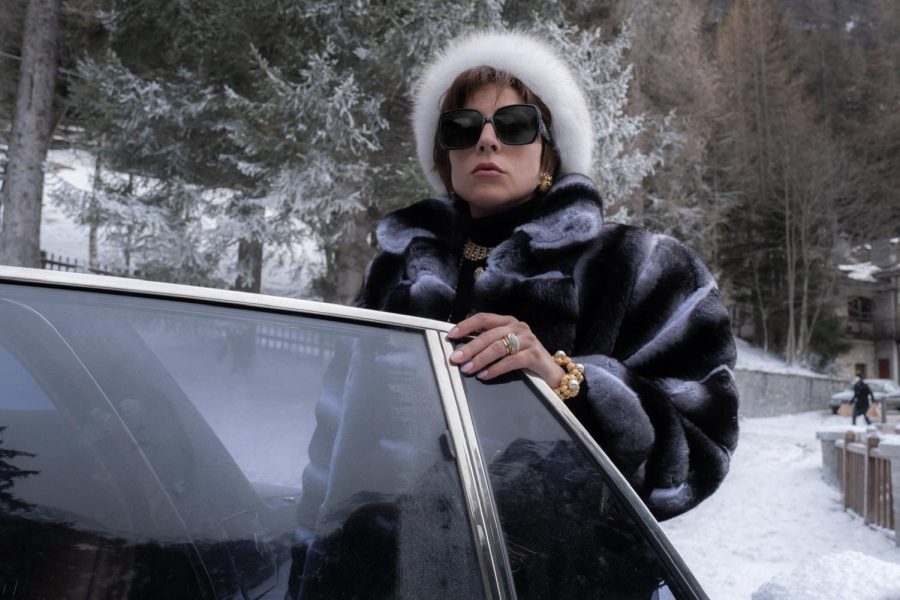 Patrizia Reggiani (Lady Gaga) is a humble outsider who meets Maurizio Gucci (Adam Driver) at a party. Their romantic relationship evolves as Reggiani’s ambition begins to unravel the Gucci family legacy at its core, beginning a domino effect of betrayal, decadence, revenge – and ultimately murder.

It was hard to believe that the early rumor in Hollywood was that “House of Gucci” was a bad movie. It was hard to believe that anyone could mess up this story with this cast. Well, that’s exactly what happened. Each of the trailers, respectively set to Blondie’s “Heart of Glass” and Eurythmics “Sweet Dreams” set the stage for a fun, upbeat, campy, dramatic period biopic. For its overly long and tedious two-hour and thirty-eight-minute runtime, it is extremely tame to provide an entertaining story in any way. The absolutely stellar performances given by (particularly two) members of the cast drove this movie to the finish line and minimized the number of times I was tempted to look at my phone.

As if Lady Gaga could not become even more of a world-renowned pop culture star, the genuine surprise of her “Cher-like” career turn, as an Academy Award-nominated actress in “A Star Is Born” was no accident. Anytime Gaga appears on screen as Patrizia Reggiani (which is a lot being the lead), your eyes are instantly drawn to her presence that is consistently full of charisma. While the film and plot have two completely different focus subjects, Gaga does her best to hold the film together where her role is needlessly large. Although they had all the time in the world, not even her motivations were fully fleshed out. It seemed like Reggiani was made out to be nothing more than gold-digging scum once she and Maurizio Gucci became star-crossed lovers, and Maurizio’s father, Rodolfo (Jeremy Irons), only insisted on keeping that idea alive. Throughout their romantic relationship, we see how both characters are equally manipulative. In the end, Reggiani killed Gucci because he deliberately stabbed her in the back, and not for the fortune and glory.

It’s not easy creating the finale to any movie; not only does it need to tie off any loose ends in subplots and wrap everything up in an acceptable fashion, but that’s also the final impression a theatrical audience walks out with and what will stick with them the most. The clear inconsistency with what the movie was trying to tell is what stuck with me. The first two-thirds of the film are full of personality and are dedicated to a life story biopic of Patrizia Reggiani: how she met Maurizio, how she became involved in the company of Gucci and the changes in her marriage. Roughly the final forty-five minutes to an hour of the film completely abandon anything relevant Reggiani is doing, aside from her hiring hitmen to kill Maurizio, and we get a compilation of unnecessary scenes, including following Maurizio attending business meetings, having conversations with his new lover Paola Franchi (Camille Cottin), and the inevitable, disappointing downfall of Gucci. The moment everyone came to this movie to see, the climax of the story, the assassination of Maurizio Gucci, feels like an afterthought shoved in because they forgot to include enough setup in the preceding two and a half hours, despite this moment starting and ending the film. The movie should have either committed to a Gucci movie, as the title says, and had Lady Gaga come in about halfway through the movie, past all the establishments of the Gucci family and world, as a supporting player. This moment would be when everything begins to go downhill. This would show the easily differentiable rise and fall of Gucci. Or in order to have any sort of cohesiveness they could have also made the movie entirely about Patrizia. We needed to see more contemplation of Patrizia’s decision to kill her ex-husband, and not have the life-changing choice be made off-screen. There was so much buildup to something everyone knew was going to happen, and then it just ended. There could’ve been some showing of the downfall of Gucci rather explaining the aftermath in text over freeze frames like all biopics do. In real life, Patrizia said that the success of the murder plan left her relieved and not at all in mourning. Where is this scene?

Adam Driver has never missed once for me in his more dramatic roles, or in any role for that matter. He has delivered two great leading performances prior to this film just in the past three months (“Annette,” “The Last Duel”). Driver’s not great, he’s not terrible, but he gets the job done in “House of Gucci.” However, he is part of the reason why the finale bombs hard. His character was not at all interesting or sympathetic, therefore you felt absolutely nothing when he was killed. It also sounded like he was progressively dropping the accent in the part of the film when he was the center of attention. On top of that, there was a staggering lack of chemistry between Adam Driver and Lady Gaga for being two of the most ridiculously popular celebrities of modern-day.

Whether it be in the set photos from way back when or simply just the trailers, Jared Leto was the talk of the town all year long. He’s flat out unrecognizable – had I not known this was Leto going in, I, along with everyone on the planet, would not have known it was Leto at all – and there’s no denying it, I still don’t know whether he was fantastic or terrible. I’m leaning towards the belief that he may have been amazing in this role, even if it was clearly a caricature. Not one line of dialogue or even an under-the-breath Italian sigh was off note. None of Leto’s roles ever lack passion, but they miss the mark more than they should, and he specified that if he got this role he would go completely nuts. Unlike Maurizio and Rodolfo, Paolo Gucci’s dynamic with his own father, Aldo Gucci, was one of the more entertaining parts of the film, and I bought every second of Al Pacino interacting with Jared Leto. But I cannot believe that in the many scenes they have together, Leto outshines even Pacino.

Jeremy Irons and Salma Hayek are also present in the film, but they’re just kinda there. Irons doesn’t even bother to attempt an Italian accent, and that’s slightly frustrating when he occupies a large amount of screen time in the first hour before his character croaks between scenes through a hilariously placed cut. Hayek has zero role as the psychic who helps plot the assassination, but it is funny because Hayek is married to the head of Gucci today, and agreed to play the role of someone who helps kill the head of Gucci in the 1990’s.

It may sound as if I’m a bit hard on this movie, but I assure you that nothing about it is truly horrendous. My problem is that none of it lived up to any sort of expectations I had. The screenplay is easily the biggest culprit of all. The dialogue falls flat, the trailers gave away some of the most quotable lines, and the story is a slogging mess overall. The editing was not very good; there were entire scenes that didn’t need to be included (they could’ve been cut and I wouldn’t have noticed) and prevented the runtime from being tightened up a bit. There is a lifeless, gray-tinted color grading covering the entire film. Ridley Scott is not off the hook for who is to blame, because only a month ago he showed that at age eighty-three, he’s still got it. I believe this is a better movie than his other recently released film, “The Last Duel,” but that movie was significantly better directed.

At this point, I can’t say this film deserves any awards recognition past two anchoring performances, as well as the makeup team and costume designers. After seeing this movie, I seem to be more confused about awards predictions than I was before. I think it could still get into Best Picture and Best Adapted Screenplay, because the Academy repeatedly makes controversial decisions. Gaga is a possibility, but aside from the three frontrunner locks of Kristen Stewart in “Spencer,” Jessica Chastain in “The Eyes of Tammy Faye” and Nicole Kidman in “Being the Ricardos,” I don’t know if a thick accent and different appearance can keep her in the running for a nomination. With an absent frontrunner in the Best Supporting Actor category, Jared Leto will most likely still be nominated. He’s not in the movie for very long and there’s no urgency to nominate him, he’s already won for “Dallas Buyers Club,” but after almost getting in last year for “The Little Things,” we know the Academy loves him.

This movie could’ve been fantastic, and I obviously wanted it to be after looking at the cast alone. It needed a lot more campiness, and a script rewrite among many other issues. Even though it was nearly thirty minutes too long, this is an instance where the parts are greater than the whole. Lady Gaga and Jared Leto produced some of their best work, and I’m trying to look for the positives, but there’s not much else to add. The third act left me leaving the theater disappointed, and most of the time the movie couldn’t quite figure out where it was going.