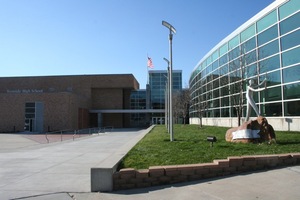 Quiz bowl is a group competition where teams from different schools compete to answer a random series of questions. At Westside, there is a very strong team led by instructor John Allemang that has been very successful in competition.  The team gave an overview of what their season looks like. Allemang discussed how he helps the team.

“We usually first determine who we want to send to competition so we can prepare them together,” Allemang said, “We usually target places we know we have weaknesses, but, other than that, it’s just [going] through questions we can find and [practicing] going through them. Our only competition this year was Bellevue University, and we got first, but we normally compete in around eight to ten tournaments, mostly at varsity levels which really test our kids.”

Quiz bowl member and senior Paul Suder spoke about his experiences on the team during his time at Westside.

“I have been doing quiz bowl for seven years now,” Suder said. “I started as a member of my elementary school’s quiz bowl team, and continued into middle school, and now high school as well.”

Suder said prep work is necessary for the team.

“Preparation usually involves a number of things, both individual learning and honing of one’s reaction time and recall abilities,” Suder said “Players are grouped into teams, and each team tries to buzz in the fastest and with the correct answer.”

COVID-19, of course, had an impact this year.

“Given all of the difficulties that have come with this year, like being unable to compete save one tournament, Bellevue University, which we won, and an inability to recruit newcomers through Club Fair Day, Westside Quiz Bowl has persevered, and I couldn’t be more proud of this team,” Suder said. “Every practice has seen our members show up with determination and eagerness to hone their skills, and attendance numbers have stayed consistent. Although many have called this year a year of stagnation, our team has rolled with the changes and come out better. Our numbers are high, and the talent for the future is promising.”