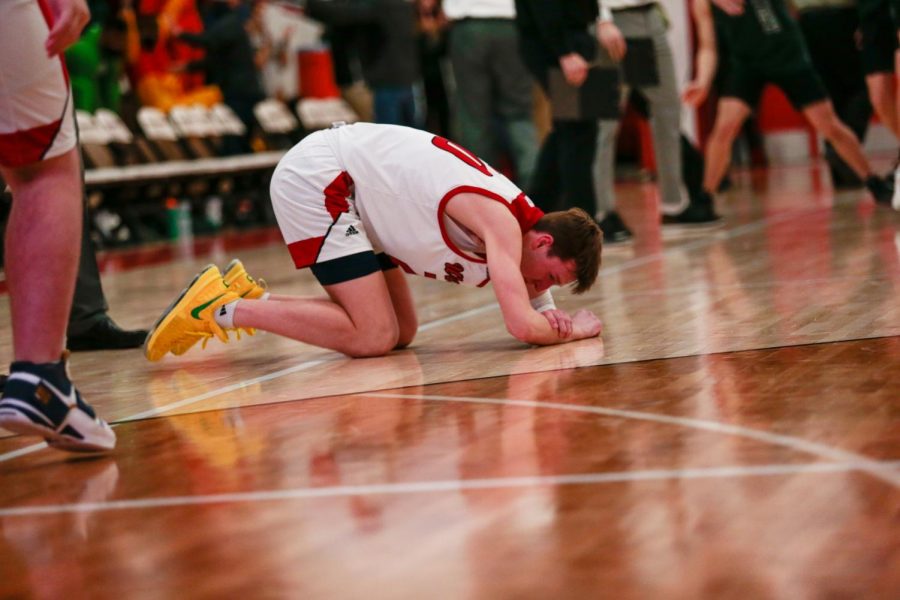 5.2 seconds left to go, down by one with Dominic Humm at the line, the free throw is missed. As time expired, Payson Gillespie’s shot for a trip to the state tournament was in the air and looked in line. However, the shot was too far and Westside’s season came to a close. Westside lost a close battle in the District A-7 final against Millard West, 55-54. The Warriors ended their season at 17-7. Despite the loss, Westside head coach Jim Simons is happy with the way his team played this season.

“We are incredibly proud of what they accomplished. Two years ago we won in this gym on a last-second shot and the ball hit every part of the rim and went in. We told those guys that night that if the ball had bounced we would still have been proud of them,” Simons said. “Payson got a great look at the end, and he missed. It was a great shot by a great shooter who had a tremendous game. We aren’t in that game without Payson playing as well as he did.”

With multiple other district final upsets across Class A, Westside missed out on the eighth and final spot due to wild card points. Lincoln Pius X, who lost in overtime to Lincoln East squeezed into that final spot. For Simons, the season had shown continual growth.

“It was a very young and inexperienced group. I thought we made great strides from December forward,” Simons said. “That was a team tonight who had a lot of seniors. Their seniors played very well, credit to them. When you get beat by one point you can obviously pick this play or that play but at the end of the day our kids played very hard tonight.”

Just under a month before on Feb. 5, the Westside took down Millard West soundly with a score of 59-38. This time around, with the season coming down to win or go home, the Wildcats physically dominated in the paint and edged out the Warriors in the end.

“I think they did a much better job handling our pressure tonight,” Simons said. “They were really sped up and uncomfortable the first time we played them. Tonight, they played at a much better pace that they like. Credit to them for handling the ball better. Their guys stepped up tonight.”

The boys” team has a lot to look forward to in the future, with all five starters returning to the court. They will have all of the off-season to prepare for the coming year. The players will be more mature and get better at the little things on the court. The Warriors are a very talented program, with the majority of it being youth-driven. Adding onto the already talented varsity team, the freshman team completed an undefeated 25-0 team. Westside looks to come out on top and make it not only to state but to take home that NSAA Championship Trophy.

“Next year I think we will be one of the number one teams in the state along with central and a few other schools. Since we were such a young team this year we return most of our team and will have way more experience,” junior forward Logan Wilson said.

In the 2019-2020 season, the Warriors were senior dominant, but this season was different. Starting junior Chandler Meeks believes the team’s bond is very strong.

“We have each other’s back. We love each and everyone, we show it in practice,” Meeks said. “We got better each and every day and we were just one shot away. I love the guys to death. Basically, our whole team is coming back next year so we will just use it as motivation.”

Even with the comparatively shortened season for the Warriors, many coaches and analysts around Nebraska feel the team is a definite championship contender next season. For Meeks, it’s just about getting better.

“We will just work hard every day no matter what it is. We always had chemistry this year and we are going to keep working on that next year. Tough loss tonight, we wanted to be at state again for the third time in a row but we just have the loss as motivation,” Meeks said.

Junior Reggie Thomas and Chandler Meeks have been three-year starters and proven their leadership roles by being the oldest and most experienced starters.

“With our young team capabilities and to see where we are at right now me and Reggie have done a good job. Reggie’s vocal leading and both of our leading by example helped our team build character and do what we needed to win,” Meeks said. “All season we knew we weren’t going to be great at the start of the season and we took some tough losses, but we kept building and kept our positive mindset.”