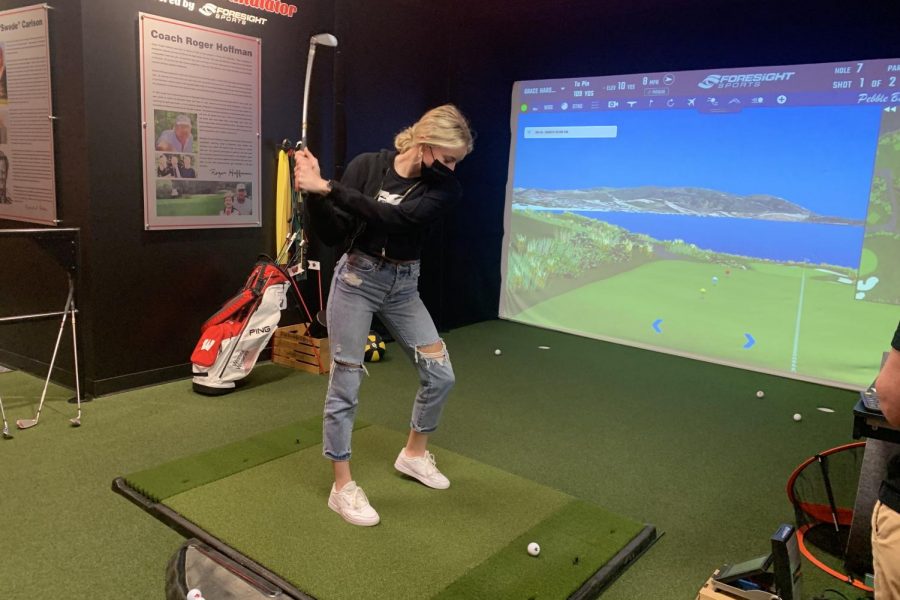 Freshman Grace Harding attempts the "Closest to the Pin Challenge."

It was a “Swede” day on Friday, Jan. 29 at the Westside Swede Golf Center. From 11:00 a.m. to 1:00 p.m.. there was an open house and “Closest to the Pin” competition from the seventh hole at Pebble Beach on the golfing simulator. Sponsored by the Westside Foundation and Jimmy John’s, every student, staff or administrator that came in got two swings to try and win. Developmental Director for the Westside Community Schools Foundation Terry Hanna said he organized the open house and gave tours to help others learn the history of the Westside Golf program.

“I think that there’s been a lot of excitement because not a lot of people have seen inside these walls here because it’s been closed off,” Hanna said. “We [gave] two hours to stop by, check it out and look at all of the history of Westside golf. Most importantly, everyone [was given] two shots at the “Closest to the Pin” challenge at Pebble Beach #7. It’s just like the course itself and is playing as the weather is right now at Pebble Beach.”

The simulator was set up so that everyone could come, put in a name and swing to see how close they could get to the iconic hole. While waiting for a turn to hit, you could also putt on the green or look around at the historic walls. Trophies and quotes from past individual and team victories are all around the room to hopefully inspire future generations.

“We have about 12 [quotes] and they talk about why they [loved] playing golf at Westside and any advice for future golfers,” Hanna said. “There’s advice from a guy from 1954 [on the wall] to [anyone], and there are a lot of kids who have never swung a club before and now they have. That’s the whole idea [of the Swede Center].

During the open house, the simulator was cautiously filled, because of COVID-19, with students and staff who all wanted the chance to win the “Closest to the Pin” challenge. Over 150 students, staff and faculty came to check it out. The prize for winning was a Jimmy John’s gift card for first place and other prizes for second and third. Junior Kolby Brown, a member of the golf team, came to swing and socialize while also promoting golf.

“Some people think of [golf] as an ‘old guy’s game’ and it’s becoming a lot more modern and appealing to youth,” Brown said. “Opening [the Swede Center] up and having kids come in here and see what it’s all about is good for the game and especially the golf program. It’ll be fun to see different people’s shots and how close they get [to the pin].”

Throughout the day many came close to the pin, but none as close as sophomore Porter Topp, a member of the golf team, who won the competition. Topp said he is looking forward to using the Swede Center and is excited to see the opportunities for younger kids to use it as well.

“I did the competition for fun and not really to try and win it but more to show everyone I was with the Swede Center and what it has to offer,” Topp said. “It could also be a good place to do more things like that in the future.”

Overall, the day was a success for the brand new Swede Center and it was a great way to learn about the game of golf and the history of Westside’s program. To find out more information about the Swede Center, check out their Twitter here.