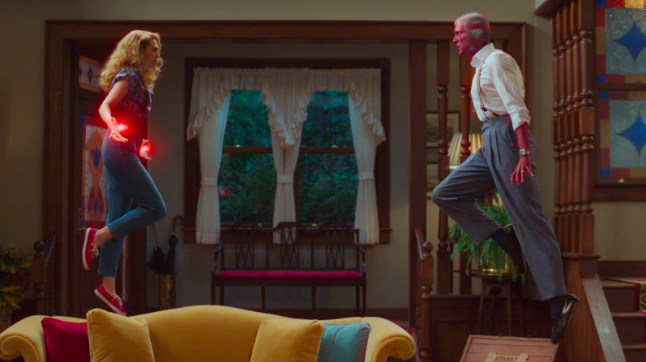 “WandaVision: Episode 5 – On a Very Special Episode…” was written by Peter Cameron and Mackenzie Dohr and directed by Matt Shakman. After Wanda (Elizabeth Olsen) throws Monica Rambeau (Teyonah Parris) out of Westview, S.W.O.R.D. now knows that Wanda is the main perpetrator behind everything.

Returning to Westview, we enter the 1980’s episode based on “Family Ties” and “Full House.” At this point in the show, there is little doubt in my mind that Wanda will be the main villain for phase four of the Marvel Cinematic Universe. I believe that by episode nine of “WandaVision,” she will become Scarlet Witch, and rip open the Multiverse. This is an event that has been confirmed to tie directly into the currently untitled “Spider-Man 3,” which will be released Dec. 17, 2021.

It’s slightly upsetting that we’re now at the midway point of the series, and barely have any new information beyond pure speculation. This episode mostly focused on the detail of how Billy (Julian Hilliard) and Tommy (Jett Klyne) will age themselves up throughout the series. More importantly, the fan-service scene in the final moments was mind blowing. The episode followed a similar structure of what we’ve seen in previous episodes, where the show is set in Wanda’s reality. Only this time, Vision (Paul Bettany) seems to be figuring out exactly what Wanda is doing, as seen when “Norm” (Asif Ali) snaps out of it. She may be able to mind-control the thousands of citizens inside the town, but her hex can’t control Vision. Who else can’t she control? As of right now she can’t control Vision, Agnes (Kathryn Hahn),  Billy and Tommy.

I was frustrated that I had to sit through another entire sitcom episode, especially since the credits went on for far too long. However,  I am glad we had some mix of mystery at the end. I hope we start getting longer episodes, where we retract from the sitcom after episode six. The show benefits from repeat viewings, but hidden details is not all the show should be. Sparky was a fun nod towards the comics, but if they killed it off with no intent to bring the dog back in Synthezoid form, what was the point?

In the real world, Acting Director Hayward (Josh Stamberg) runs a briefing on Rambeau’s experience in the hex, and it’s later revealed that Wanda stole Vision’s corpse from the S.W.O.R.D. base. I have an instinct that Hayward was the one who stashed Vision’s body away for villainous purposes, and Wanda was only trying to get him back. The reason for this is that Monica asked when the footage of Wanda breaking in happened, and Hayward said “nine days ago,” a time when Rambeau was blipped back into existence. Realistically, she should know this information without asking, which is why I suspect Hayward may be trying to keep much of this under wraps.

Our new favorite trio, Monica, Jimmy Woo (Randall Park) and Darcy Lewis (Kat Dennigs) band together to figure out how to reenter Westview without being detected. It’s already known that Wanda transfigures objects to fit the era of television currently surrounding them, so why not send objects that are from that era? We don’t see who, but Monica texts an aerospace engineer, possibly the Pyms, Hank (Michael Douglas) and Janet (Michelle Pfeiffer), or introducing Victor von Doom or another Fantastic Four character. Because of this, Rambeau sends a 1980’s drone in, unknowingly armed, and Director Hayward orders them to fire on Wanda. However, she destroys the drone and brings it out to S.W.O.R.D., playing into her awareness of everything, and that she only wants to be left alone. Before she returns to Westview, she temporarily controls the agents to turn their weapons on Hayward as a distraction so she can create a forcefield around the entrance.

The “big moment” that has potential to obliterate the Internet is Evan Peters returning as Pietro Maximoff (Quicksilver) from the Fox “X-Men” Universe. The only reason whyI don’t believe that this is the same Quicksilver we knew over the span of the three movies he was previously in (“X-Men: Days of Future Past,” “X-Men: Apocalypse” and “X-Men: Dark Phoenix”) is that there has been no indication that the Multiverse has been broken yet. I still believe that the person that showed up at Wanda’s door is Mephisto, Nightmare or some other evil being, disguising themselves as Pietro. From what we’ve come to know of Peters’ portrayal of Pietro, he has a quirky sense to it and if that isn’t displayed in the next episode, if he isn’t already revealed as someone else by then, that lowers the possibility significantly. That’ll be the burning question for weeks to come and, despite what I think, if that is Quicksilver from the Fox Universe, fantastic! Until we find out for sure, I’d label this as a neat and confusing misdirect.

As Darcy said, Wanda “recasted” Pietro, but by the look of it even Wanda doesn’t realize that this person is her brother. I could understand exactly why everyone wants that to be Pietro and not someone else, it puts into discussion many other Fox “X-Men” alumni returning. We know that’ll happen in the near future due to Ryan Reynolds returning for an R-rated “Deadpool 3” set in the Marvel Cinematic Universe, I believe it’s only come as a shock to many because this is happening sooner than expected.