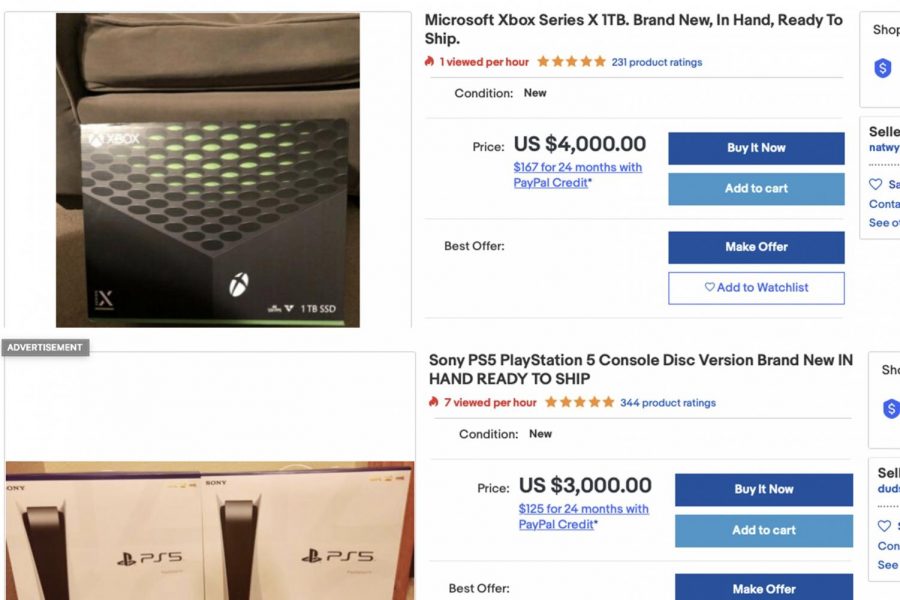 Consoled on auction on Ebay

With the new generation of gaming consoles recently released, every avid gamer with a few dollars to spare is itching to get their hands on one. But a few dollars is an understatement. With the XBox Series X weighing in at $500 and the Playstation 5 at $400, these gaming consoles are quite the investment. Of course, that’s if you don’t want to play your Playstation 4 disks on the Playstation 5. If you do, you’ll have to choke up an extra $100 for an optical drive, bringing the grand total to $500. If you’re looking to get your hands on a next generation console, you may end up spending an upwards of $1,000.

These consoles include all of the next generation hardware, including 4k ability, and high-end graphics cards for extra realism in-game. Although, as of now, there are next to no games to take advantage of these features. Almost all games released with the Xbox Series X and PS5 can be run on the Xbox 1 and PS4.

One of the only games that truly takes advantage of the new technology is “CyberPunk 2077,” made by CD PROJEKT RED. Although the game is available on last generation consoles, it does not run well.

On eBay, the Playstation 5 has seen auction prices of up to $3,000, with the Xbox series X going for up to $4,000. Spending just $1,000 on a custom gaming PC could give the buyer almost twice the performance.

For these reasons, as of now, the next generation consoles are not worth purchasing, no matter how badly you want one. With next to no games to match the capabilities, incredibly large jumps in price and cheaper alternatives, the best thing to do would be to hold off on buying one until the price have returned to normal and more games are released.