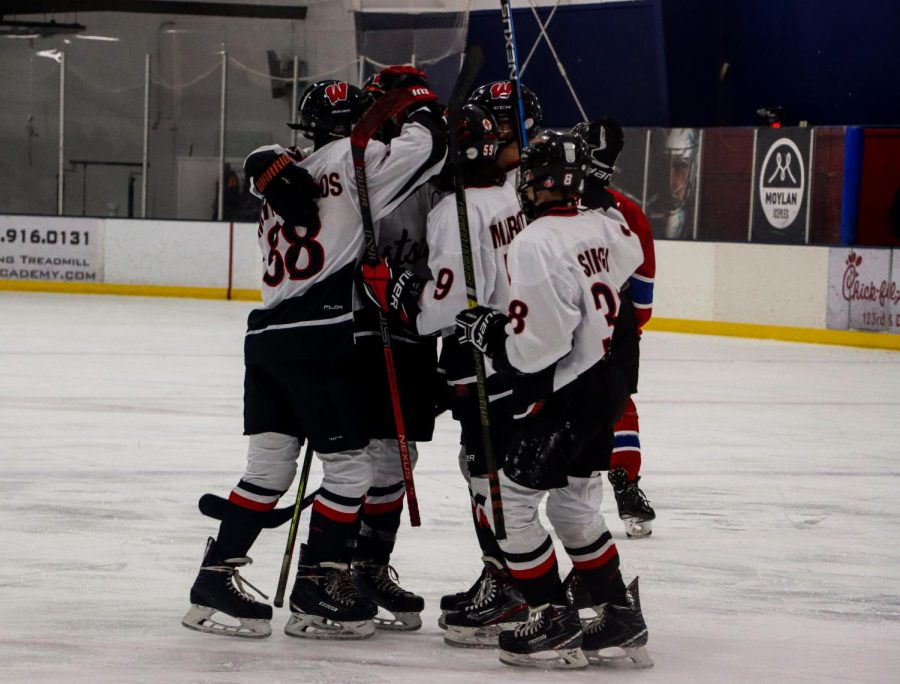 The Westside Warriors varsity hockey team has started their season despite many challenges with Covid-19 restrictions. Due to the pandemic, if a player on the hockey team tests positive or is exposed it shuts the whole team down for 14 days causing canceled games. The Warriors’ have had several games postponed due to their opponents having to quarantine. Another problem the hockey team faces is minimal ice time for their practices and games. The National Collegiate Hockey Conference, or NCHC, is having one of their two “hockey bubbles” at Baxter Arena. The NCHC, the conference that the University of Nebraska at Omaha is a part of, has forced ice time away from high school teams. With this happening, it leaves the Warriors with only one practice and two games a month. Head coach, Tom Shaffer thinks the team is very young and the potential is very bright for his team.

“This is my fourth year coaching and this is the youngest team I’ve ever had. We have 18 players and only two seniors. Last season we finished 8th out of 11 teams, not where we wanted to end. This season, we have a lot of talent but they’re young and once we got past the first few games we started clicking. We are currently sitting in 1st place with a record of 6-1-1,” Shaffer said.

After multiple practices and games had been moved or postponed the Warriors finally got an opportunity up against one of their biggest opponents in Creighton Prep. The Warriors took down the Jr. Jays 2-1 on Nov. 18 to limited attendance.

“Normally when we play Prep at Baxter Arena the stadium is packed with both Westside and Prep fans. Right now the stadium isn’t nearly as full but we are still so happy to have beaten Prep who is most likely favored to win state,” Shaffer said.

Westside has not had a promising start to their season. They haven’t been able to have a consistent practice schedule due to the UNO Baxter Arena limitations and protocols for COVID-19. The teams have been doing the best they can to prepare for their season. Co-captain Ty Madison speaks on how he feels about him and his team’s practice limitations.

“Normally we have practices Monday nights and games Wednesday and Sunday. But with UNO hosting the college hockey bubble, our schedules could change a lot,” he said.

Madison and his team plan to stay safe in the players’ box and locker rooms, implementing social distancing as much as they can as long as wearing their masks every time they can besides on the ice.

“Just wearing our masks whenever we can. We’re always so close to each other. So that’s really the only thing we can do to help,” Madison said.

The Westside hockey team looks to overcome its problematic practice schedule and overall season. Madison feels the Warriors should be contenders in the state tournament this year.

“If for some reason we don’t get the state championship, with the young talent we have, we need to build the chemistry between the players so that they have the best chance to get to state.”

At 7-2 on the season, the Warriors hope to continue strong through the front half of the season. Next up for the Warriors, Omaha Metro on Dec 6. at the Moylan IcePlex.