Preview: Warriors to Take on Patriots in Semifinals 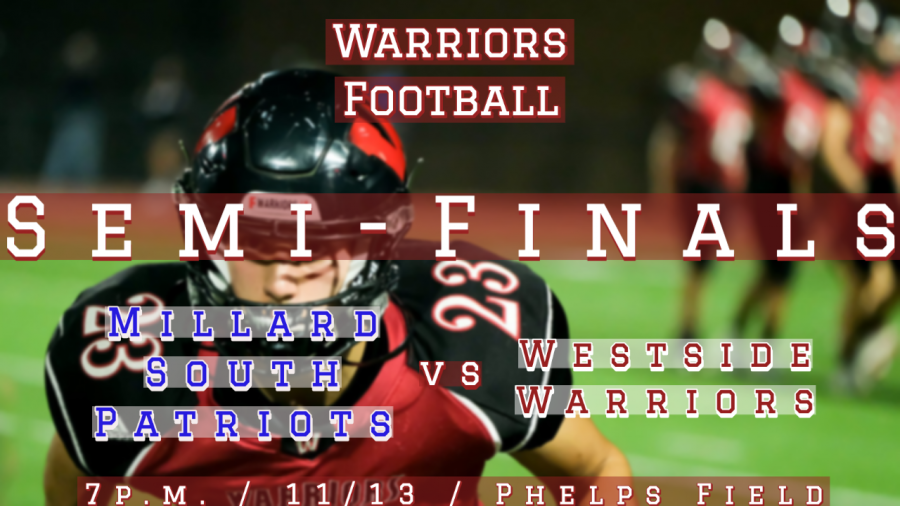 The Westside Warriors are looking to get back to Memorial Stadium for the second year in a row. This week the matchup is against the Millard South Patriots. Westside is coming off a 49-29 win over the Lincoln East Spartans. While Millard South is coming off a 34-20 win over the Creighton Prep Bluejays. Junior Kolby Brown expressed that to win the game Friday, today, they are going to have to come out with high energy and execute the game plan as best as they can.

“It was a special playoff run we had, but I know we’ve all turned the page from last year. We’re all focused on Friday night and just doing our jobs to the best of our ability” Brown said.

Last season, the Warriors fell short to the Patriots early in the year but then later beat them in the playoffs. While the two teams haven’t played yet, they’re both playing really well this season. The Warriors have an undefeated record at 10-0. The Patriots only have one loss, with an 8-1 record.  The Warriors defensive will be facing a unique offensive in the Patriots due to their two-quarterback system.

“They are playing two quarterbacks now. We will look at the film and figure out a game plan,” said Head Coach Brett Froendt.

One quarterback handles the running while the other focuses on passing duties. The Warriors’ defense has faced unique offensives before and stopped them. To do it again, Froednt said the game plan will be key and a more balanced offensive attack.

“We have to get our passing game better. We got to protect better and see our patterns of our receivers. We just have to be more efficient,” said Froendt.

Westside is set to take on the Millard South Patriots in the semi-finals of the playoffs on Friday, Nov. 13, at 7 p.m. at Phelps field.