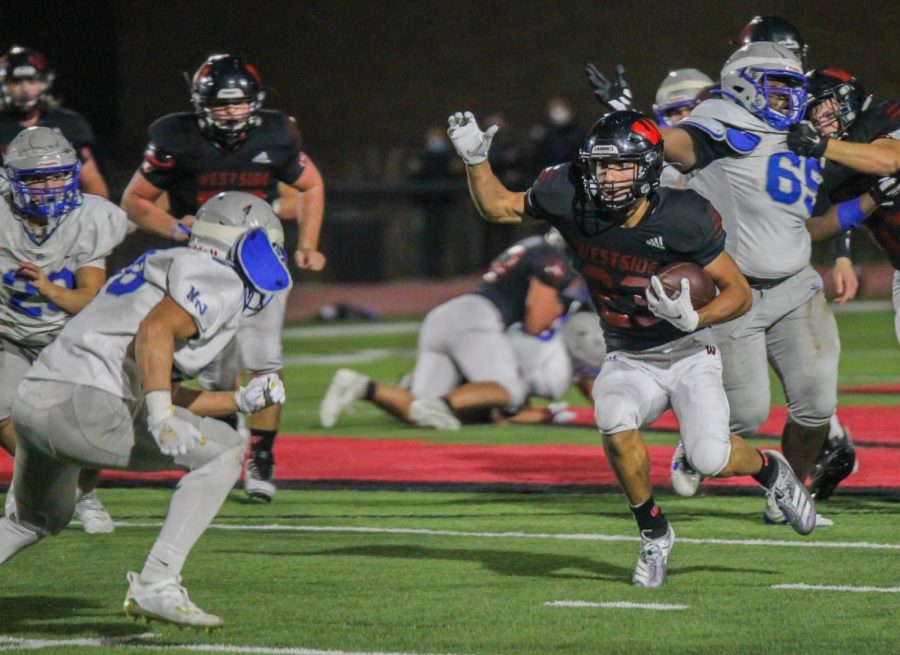 Westside stays undefeated in the homecoming game matchup with a 44 to 14 win against the Millard North Mustangs. From the start, Westside attacked the ball with a rushing touchdown from quarterback Cole Payton. The Warriors would extend their lead to 20 with another two rushing touchdowns by Dickerson and Rezac later in the first quarter. The Westside defense also came to play keeping Millard North’s rushing offense to a minimum.

“We had to stay patient really, we knew that’s what they did and we practiced for that exact type of game,” senior Taylor Bruber said.

The Millard North Mustangs under head coach Fred Petito run a flex-bone style of offense, which focuses heavily on the rushing attack. Prior to the week six matchup, the Mustangs averaged over 250 rushing yards a game while only adding 41 passing yards. In the days leading up to the matchup, the Bruber feels that the Westside defense prepare well for the different style of offense.

“On defense, everybody has to do their job and it really comes down to that,” Bruber said.

On Friday, Millard North had a total of 29 minutes and 52 seconds of ball possession and Westside had 17 min and 38 seconds. The longer possession of the ball did not go in favor of Millard North. Although limited in time of possession, the Warriors stayed efficient in their minutes keeping five of their six scoring drives to under two minutes.

“The reason our offense was able to move the ball so well is the offensive line was able to get a super good push and finish blocks,” said sophomore, running back Curt Cubrich.

For many fans, the offensive line can be a neglected part of the game. However, the Warriors have worked to make it an essential part of their game going forward. After the homecoming win, the Warriors will travel to Veterans Memorial Park in Norfolk to take on the Norfolk Panthers on Friday, October 9 at 7 p.m.