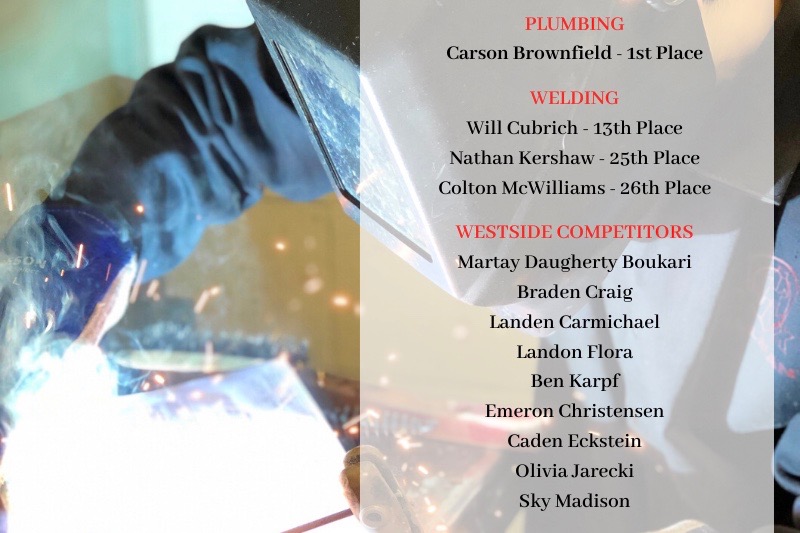 Featured above is a list of students who participated in the Metro Omaha Trades Invitational.

Thirteen Westside students participated in the Metro Omaha Trades Invitational at Metropolitan Community College on Friday, Jan. 31, which determined the qualifiers for their state competition. Engineering instructor John Bombac described how the students became involved in the club of sorts and what their placement entails in the future.

“We will take fifteen to sixteen students [to the Metro Omaha Trades Invitational] and that’s what we consider our district competition,” Bombac said. “Based on how our kids’ score, we take our top three to the Skills USA competition.”

Metro Community College is the host for the Metro Omaha Trades Invitational, and Bombac said that the community college has held one of the best invitationals in the state.

“Throughout the state of Nebraska, the different area community colleges are supposed to be hosting and holding [invitationals] for [the students] but some of them don’t do it at all,” Bombac said. “Metro does an excellent job for our region. They have plumbing, carpentry, culinary, electrical, welding, weld fabrication and a whole bunch of the ones that are represented at the Skills USA and that’s how we have gotten involved.”

One of the areas of competition that Westside participated in this year was plumbing. When senior Carson Brownfield asked his instructors if he could compete in plumbing instead of welding, he said they were surprised but let him take on the challenge.

“My dad is a plumber so I started to like plumbing because I’ve been doing it with him for so long,” Brownfield said. “[The instructors] did not [know I knew how to plumb]. I told them a little bit before and Mr. Cross and Mr. Bombac talked a little bit and then got me in.”

Once at the competition, Brownfield was the only student from Westside who did not do welding, but he said he did extremely well and placed at Skills USA as well as went home with a first-place trophy.

“I was really surprised [that I won] because I was up against kids that were taking Metro classes,” Brownfield said. “I am just a basic kid who got into plumbing so it was really weird. [At Skills USA,] I know there’s gonna be a lot more [people] welding so I’m not as worried, but that’s a lot of people I’ll be going up against. I don’t think I’m the best guy there but it will come down to making sure I do everything right.”

For the welding portion of the invitational, Westside junior Will Cubrich placed thirteenth out of 62 participants, even though he decided to attend at the last minute.

“I actually didn’t mean to [participate in it], but then somebody signed up and got sick so they asked me because they had already paid for the spot,” Cubrich said. “I ended up placing thirteenth out of 62 people.”

The top three students from each category will participate in the Skills USA competition this summer in Louisville, KY.