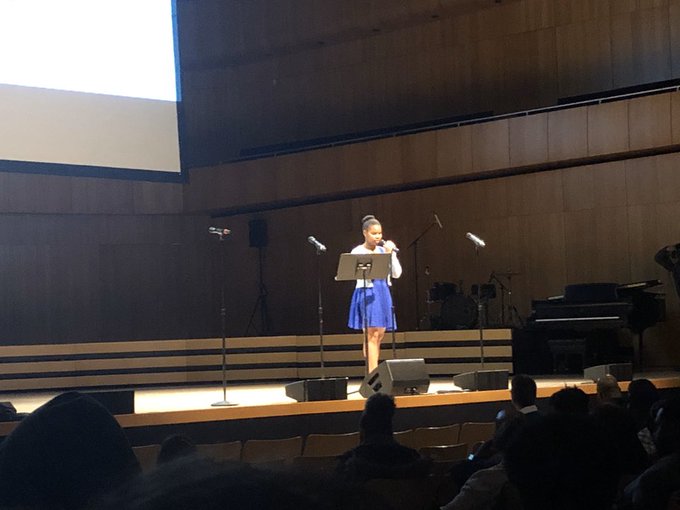 While most kids were at home enjoying their day off, five Westside students were competing at the “Living the Dream” high school competition, which took place at the Holland Performing Arts center on Monday, Jan. 20. In order to compete, students had to submit an entry and were selected from many others. Westside students Sakari Chatmon, ZamZam Farah, Chaun’Cey Hagens, Jules Wuestewald and Dianara Ubisse were selected and two students were recognized and received awards for their work.

Junior Zamzam Farah received the Mayor’s Medallion award and placed second in the spoken word category. She said her poem came from her experiences of immigrating and being an American.

“I did a poem about what it means to be an American while coming from a different background,” Farah said. “I focused on the positive side of America because a lot of people talk about the things that are wrong in this country so I wanted to focus on my experience. My experience was good and growing up, I didn’t experience a lot of bad things happen to me. I wanted to focus on bringing the unity of both of my cultures, Somalia and America, so that’s what I did a poem about.”

Upon receiving the award, Farrah said she was thrilled to see how her poem made an impact at the event.

“It was shocking for the Mayor’s award because I didn’t really think it was a big deal but when I got on stage, it was like, ‘wow, I actually did something,’” Farah said.

As well as spoken word, some of the other categories of the competition were dance and music. The theme of the day was to ‘learn together as one united people,’ according to the Living the Dream website.

Senior Sakari Chatmon took first place in the performance division by performing a dance to the song “Stand Up” by Cynthia Erivo. Chatmon said she took inspiration from some of her ancestors and wanted to show emotion about slavery.

“In the song, certain lyrics portray things from decades ago and it just talks about the battles and the power [the singer] needs, and that’s how I portrayed it,” Chatmon said.

In order to support these Westside students, Director of Secondary Teaching and Learning, Kim DeLaCruz attended and said she loved seeing the passion throughout all of the students.

“It was really nice to see students as activists and students who were speaking about things that they were passionate about,” DeLaCruz said. “It was a nice way to celebrate the legacy of Martin Luther King.”