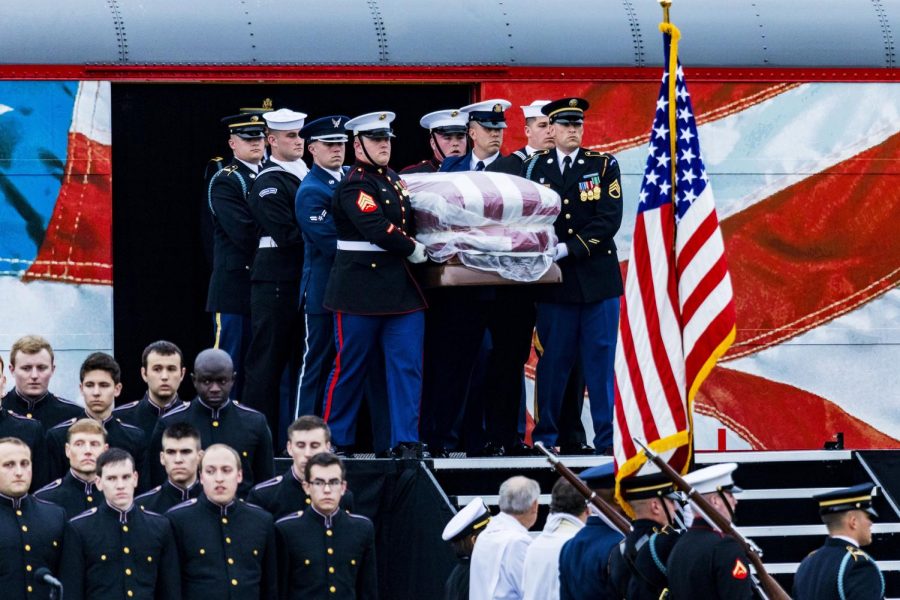 Scott Dobry is hunched over in the freezing rain, focused on his subject. He carefully adjusts his lenses trying to get the perfect resolution. Westside alumnus Scott Dobry is a professional photographer who discovered his passion for photography in Westside Journalism. Dobry, who often shoots for Union Pacific was given the honor of taking photos of the Bush 41 Funeral Train, a once in a lifetime opportunity.

Dobry credits his first interests in photography to his father.

“My dad was a really good amateur photographer, he always had neat cameras lying around,” Dobry said. “I found those really cool and interesting.”

When Dobry arrived at Westside High School, he recalls picking up The Lance and being impressed with the quality of the photography.

“I was simultaneously inspired and overwhelmed, because I thought, ‘well, if they have people doing a such great job already, why would they need me,” Dobry said.

But Dobry decided to make a decision that he said has altered his life.

“One day, I made a fateful decision to go into the journalism room and introduce myself and see if they needed a photographer,” Dobry said. “That was a pivotal point in my life because if I hadn’t done that, I might not have chosen this career.”

Dobry graduated in 1983 and by the end of his high school career, he had become photo editor for the Shield yearbook and The Lance. Dobry won numerous photojournalism awards at Westside and was awarded the Quill and Scroll honor society, an honor given to some of the top journalism students around the world. It was onto the next step for Dobry. He attended the University of Nebraska at Lincoln and graduated with a bachelor’s degree in Journalism.

Flash forward a few years and Dobry found himself getting a call from Union Pacific in spring of 2018. They asked for personal background information, social security number, date of birth, and other personal information, something Dobry says he doesn’t usually give out over the phone.

“UP said that it was going to be a really cool project ‘but we can’t tell you anything about it,’ Dobry said.

According to Dobry, six or seven months passed by, and the day after President Bush passed, Union Pacific called Dobry again.

“I got a call from UP saying ‘remember that thing that we called you about? Well it was about George Bush passing and he’s going to do a funeral train,” Dobry said.

It’s been almost 50 years since a president’s body has been transported by train, being Dwight Eisenhower

But George H.W. Bush. had a very good relationship with Union Pacific. He had a locomotive painted to look like Air Force One and he even drove it a few times.

Typically, Dobry shoots for advertisements and commercials. These are controlled conditions where if something goes wrong they can just reschedule and shoot it again. But this situation was different.

“It was more journalistic based,” Dobry said. “I could only use what I could carry with me so I could be light and nimble and I had to approach it much more like a journalist. It reminded me of my days of working as a journalist for the Westside publications.”

Dobry actually never got onto the train itself. The only media allowed on the train was the Bush family’s personal photographer. Instead, Dobry said he spent his days in a roped off area the size of about two football fields sitting around in the cold with the other photographers. They weren’t allowed to leave the area and they only had chips and water to eat and drink all day.

The conditions for the shoot were far from ideal. It was overcast, rainy, and bitterly cold.

“Then magically, almost poetically, about five minutes before the train rolled in the rain let up,” Dobry said.

Even with the poor conditions, Dobry was able to capture pictures that represent the event beautifully.

Dobry was a part of a once in a lifetime experience, and it was all because of a decision he made back in high school to take a chance and see where it took him.